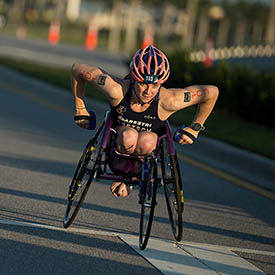 Podium finishers in each paratriathlon sport class to receive a share of $24,500

COLORADO SPRINGS, Colo. — USA Triathlon today announced that, in partnership with the Challenged Athletes Foundation (CAF), the two organizations will offer the first-ever professional prize purse at the Toyota USA Paratriathlon National Championships. The $24,500 total prize purse, to be provided in equal amounts by CAF and USA Triathlon, will be presented to the podium finishers in each sport class.

The National Championships will be held July 20 in Long Beach, California, in conjunction with the inaugural Legacy Triathlon. The race will take place at Alamitos Beach, the proposed site of the triathlon competitions for the Los Angeles 2028 Olympic and Paralympic Games. Athletes will compete for national titles in six paratriathlon sport classes.

National champions will receive $1,000 each, runners-up will receive $500 and third-place finishers will receive $250. Sighted guides competing alongside athletes with visual impairments will also receive equivalent winnings.

“By offering professional prize money at the Toyota USA Paratriathlon National Championships, we hope to create a watershed moment for elite paratriathlon in the U.S. and set an example for the continued professionalization of the sport worldwide,” said Rocky Harris, USA Triathlon CEO. “We are proud to help offset the costs that these dedicated athletes face as they chase their dreams of competing at the Paralympic Games. And by enhancing the overall profile of the event we are able to increase fan, media and sponsor interest in paratriathlon during the lead-up to Tokyo 2020. I want to extend our deep appreciation to CAF for their significant contribution to make this happen.”

“For the past 25 years, CAF has been all about growing paratriathlon,” said Bob Babbitt, Co-Founder of the San Diego-based Challenged Athletes Foundation. “We were instrumental in the creation of the handcycle division at the IRONMAN World Championship in 1994; we created the first-ever paratriathlon camps and clinics in 2009; we funded an elite paratriathlon team starting in 2013; and we have been instrumental in growing participation in the sport worldwide. America’s elite paratriathletes are some of the greatest athletes on the planet — and adding prize money to the Toyota USA Paratriathlon National Championships was a logical next step. CAF is proud to partner with USA Triathlon to help support not only these amazing athletes, but the next generation of athletes as well!”

Prize purse recipients must hold a current paratriathlete or elite paratriathlete USA Triathlon membership valid through July 20. In addition, they must be either a U.S. citizen or U.S. National able to represent the United States at International Triathlon Union (ITU) competitions immediately.

About the Challenged Athletes Foundation
The Challenged Athletes Foundation® (CAF) is a world leader in helping people with physical challenges lead active, healthy lifestyles. CAF believes that participation in physical activity at any level increases self-esteem, encourages independence and enhances quality of life.  Since 1994, more than $110 million has been raised and over 26,000 funding requests from people with physical challenges in all 50 states and dozens of countries have been satisfied. Additionally, CAF’s outreach efforts impact another 60,000 individuals each year. Whether it’s a $2,500 grant for a handcycle, helping underwrite a carbon fiber running foot not covered by insurance, or arranging enthusiastic encouragement from a mentor who has triumphed over a similar challenge, CAF’s mission is clear: give opportunities and support to those with the desire to live active, athletic lifestyles. To learn more, visit challengedathletes.org or call 858-866-0959.