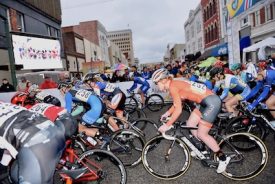 Anniston, Ala. (April 9, 2019) — Four past winners will be part of a strong Women’s Pro/Cat 1/2 field when the green flag drops this Saturday on the 17th annual Sunny King Criterium in downtown Anniston, Ala. The Men’s Pro/Cat 1 field will feature riders from three UCI Continental teams, as well as international competitors representing more than six countries. This is the only pro cycling event in Alabama that is part of the prestigious USA Cycling Pro Road Tour (PRT).

All elite and pro races of the Sunny King Criterium will be broadcast on a free webcast this Saturday from Noon to 9 p.m. CDT. Sports commentator and broadcast producer Brad Sohner returns to call the action.

“There’s no better place to kick off the criterium racing season for USA Cycling’s Pro Road Tour than in Anniston. It’s a fast, smooth course in downtown with plenty of spectators. It is one of the few events in the country that offers a full nine hours of free webcasting to showcase amateurs and pros,” said Sohner. Alabama Power will return to sponsor the webcast for a fourth year.

The Alabama Cycling Classic combines the Sunny King Criterium with the Noble Street Festival in downtown Anniston on Saturday, April 13. A second day of racing, Sunday, April 14, features  the Piedmont Road Race. More than 500 cyclists are expected to compete in 29 cycling events over the weekend. There is more than $31,000 in prize money for USA Cycling-registered athletes. Medals and prizes are up for grabs by top amateurs and juniors.

“I am really looking forward to coming to Anniston again. There’s such a great atmosphere around the bike race and the community is so welcoming,” said Schneider, who has finished in the Top 10 at the Sunny King Crit each year since 2015. She was fourth last year. “I would love to reclaim the crown that I won in 2016, but the women’s field will be full of very talented riders.”

Lily Williams (N.C.) of Hagens Berman | Supermint returns to defend her 2018 title. This UCI-registered women’s professional cycling team will have five riders in the crit.

“Last year was a surprise win. It was my first PRT race as a pro. It will be one of the first races I will have done more than once, and also having a good crit team there will make the race a lot of fun as we will have a number of cards to play,” said Williams. “Crits are probably my favorite discipline of racing, so to have a crit with points on the line really verifies the importance of crit racing and makes the wins more meaningful. The live stream was huge too. Being able to watch our races and represent our sponsors on TV is huge for growing our half of the sport.”

The Men’s Pro/ Cat 1 event on Saturday will take place under the lights. Three UCI Continental squads in the field are Elevate-KHS Pro Cycling, Arapahoe l Hincapie presented by BMC and Team Skyline. The Elevate-KHS Pro Cycling Team will be led by sprinter Eric Young (Colo.), who won the silver at the 2018 USPro Criterium Championship. In March this year, he earned  two podiums at the Tour de Taiwan.

Another dangerous squad for the 60-lap men’s race is Texas Roadhouse Cycling. Among the six riders coming to Anniston are Coloradoans Daniel Holloway, Danny Summerhill and Luke Keough.

“Myself and Texas Roadhouse Cycling are excited to return to Alabama Cycling Classic. The group has always had great success over the years at this event,” said Holloway, who has 21 national titles on the track, including three gold medals at the 2018 U.S. Elite Track Championships (Omnium, Points, Madison).

“Danny, Adrian Hegyvary and myself are coming off a long winter season on the track, but are motivated to put on a show and make a hard race. Racing in Anniston is always a treat. The crowd comes out every year in a big way to support the racers,” added Holloway.

Sunny King Automotive Group continues as a longtime supporter of the Sunny King Criterium and Noble Street Festival. A portion of proceeds from all bicycle race registration fees will be donated to the American Cancer Society Relay for Life chapter of Calhoun County. Since 2002, more than $120,000 has been raised for cancer research and patient support.

The Sunny King Criterium began in 2002 as Anniston’s signature cycling event for professional and amateur male and female cyclists from around the globe. The start/finish line for the criterium is located at 11th and Noble streets in downtown Anniston, with 21 categorized races for adults and juniors. The criterium is one of 18 national cycling events on USA Cycling’s Pro Road Tour. Six categorized road races for men and women will be held on Sunday for the Piedmont Road Race. This event features a 40-mile loop with rolling terrain through the Talladega National Forest. The start/finish will be in downtown Piedmont, Ala. Admission is free for spectators. All races are managed by Start Smart Cycling.

Start Smart Cycling, LLC (SSC) provides professional management and consultation for all areas of cycling and community-based events. SSC specializes in the production and management of sports events. Follow on the web (startsmartcycling.com), on Facebook (StartSmartCycling), and on Twitter (Start_SmartBike).

More than 822 million activities: 2019 Year In Sport data from Strava