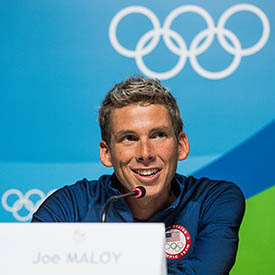 COLORADO SPRINGS, Colo. — USA Triathlon today announced that 2016 U.S. Olympian Joe Maloy has been hired as coordinator of the USA Triathlon Collegiate Recruitment Program (CRP), which identifies and recruits top-level NCAA runners and swimmers to elite triathlon. A member of the USA Triathlon High Performance staff, Maloy started on June 24 and will work remotely out of Southern California.

“USA Triathlon is proud to bring another Olympian onto our staff — not only to build on the strong foundation of the CRP, but also to develop its future in new and innovative ways,” said John Farra, High Performance General Manager at USA Triathlon. “Joe’s background as a collegiate swimmer, ITU triathlete and Olympian lends him an authenticity that will be key to recruiting the right athletes to the CRP. I know Joe is ready to hit the ground running as we approach Tokyo 2020 and the next Olympic quadrennial.”

The CRP fast-tracks the talent transfer of single-sport collegiate runners and swimmers who have the potential to be elite triathletes. Through active recruitment, assessment, mentorship, support and a full-time coaching environment within an elite squad, USA Triathlon has increased the quality and quantity of the next generation of potential Olympic medalists.

“Collegiate athletes who’ve transitioned to triathlon have enjoyed success at the sport’s highest levels,” Maloy said. “Barb Lindquist recognized an opportunity to introduce these athletes to our sport when she started USA Triathlon’s Collegiate Recruitment Program, and I’m looking forward to building upon that work. This is not only a great opportunity to help USA Triathlon find podium contenders for the Paris 2024 and Los Angeles 2028 Olympic Games, but it’s also a chance to introduce hard-working women and men to both a sport and a community that will positively impact their lives for years to come. “

Maloy was an NCAA Division I swimmer at Boston College, where he earned his undergraduate degree in 2008 and his master’s in 2010. He began competing on the elite International Triathlon Union (ITU) circuit in 2010, ultimately becoming the 2014 USA Triathlon Elite national champion and the 2013 Elite Nationals runner-up.

At the Rio 2016 Olympic Games, Maloy was the top American man with a 23rd-place finish. Also in 2016, he anchored the U.S. Mixed Relay team to its first-ever world championship title in Hamburg, Germany. In addition, he is an accomplished non-draft triathlete, having won the 2015 Noosa Triathlon and the 2016 Escape from Alcatraz Triathlon.

In addition to his athletic achievements, Maloy has significant coaching experience. He was the assistant coach of the Boston College men’s and women’s varsity swim teams from 2008-10 and coached a triathlon camp in Egypt in 2017 as part of USA Triathlon’s sports diplomacy initiative. He founded a private coaching business in 2018, and he coached the 2018 USA Triathlon Junior Elite Development Camp in Colorado Springs, Colorado. Maloy’s coaching and training articles have appeared in in Swimming World Magazine and the TrainingPeaks blog.

Maloy is also a team captain of the 2019 USA Triathlon Foundation Ambassador Team Powered by Newton Running. In that role, he helps lead community service efforts while using his social media platform to advance the Foundation’s mission and vision.