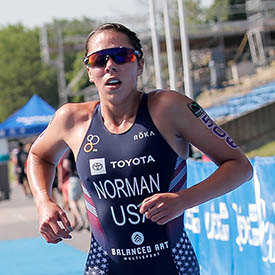 The National Championships will be held July 20 in Long Beach, California, in conjunction with the inaugural Legacy Triathlon. The course is centered at Alamitos Beach, the proposed site of the triathlon competitions for the Los Angeles 2028 Olympic and Paralympic Games.

The prize purse is the first in USA Paratriathlon National Championships history. Winnings will be awarded to podium finishers in each of six paratriathlon sport classes, and guides for athletes with visual impairments will also receive equivalent winnings.

“As a company committed to inclusivity through mobility, there was no question these athletes should be offered a prize purse at the Toyota USA Paratriathlon National Championships,” said Dedra DeLilli, group manager, Olympic and Paralympic Marketing, Toyota Motor North America. “These athletes have overcome incredible challenges throughout their careers and as a partner of USA Triathlon, Toyota wants to ensure that they are recognized for their achievements. We look forward to supporting the upcoming Toyota USA Paratriathlon National Championships and cheering on all of the participants as they compete for a national title.”

“USA Triathlon is proud to have a partner in Toyota that truly demonstrates its commitment to the professionalization of our elite paratriathletes,” said Chuck Menke, USA Triathlon CMO. “This is an extension of the invaluable support Toyota already provides to the U.S. Paratriathlon National Team program, enabling us to further raise the profile of our U.S. athletes in the lead-up to the Tokyo 2020 Paralympic Games. We are grateful for the generosity of both Toyota and CAF to make this historic prize purse a reality.”

National champions will now receive $1,500 each, runners-up will receive $750, and third-place finishers will receive $375. Prize purse recipients must hold a current paratriathlete or elite paratriathlete USA Triathlon membership valid through July 20. In addition, they must be either a U.S. citizen or U.S. National able to represent the United States at International Triathlon Union (ITU) competitions immediately.

Toyota (NYSE:TM) has been a part of the cultural fabric in the U.S. and North America for more than 60 years, and is committed to advancing sustainable, next-generation mobility through our Toyota and Lexus brands. During that time, Toyota has created a tremendous value chain as our teams have contributed to world-class design, engineering, and assembly of more than 38 million cars and trucks in North America, where we have 14 manufacturing plants, 15 including our joint venture in Alabama (10 in the U.S.), and directly employ more than 47,000 people (over 36,000 in the U.S.). Our 1,800 North American dealerships (nearly 1,500 in the U.S.) sold 2.8 million cars and trucks (2.4 million in the U.S.) in 2018.

Through the Start Your Impossible campaign, Toyota highlights the way it partners with community, civic, academic and governmental organizations to address our society’s most pressing mobility challenges. We believe that when people are free to move, anything is possible. For more information about Toyota, visit www.toyotanewsroom.com.