The sold-out GFNY Cozumel is the next stop of the Gran Fondo New York World season on November 23, 2014 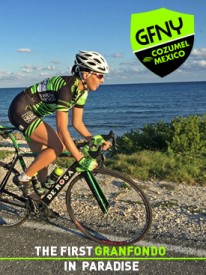 New York City, November 20, 2014 – The inaugural GFNY Cozumel will be held on the Mexican tropical island of Cozumel in the Caribbean Sea on November 23, 2014. The race attracts a sold-out field of 1,000 riders from all over the world. Athletes will enjoy fully closed roads and spectacular views of the Carribean Sea. GFNY Cozumel brings challenges that are unique to the sport of granfondo and are no less daunting than the steep climbs and tricky descents of some other granfondo events. Although the course is flat, riders will need to overcome the relentless tropical sun and the constant Caribbean trade winds. GFNY Cozumel will be raced over two distances: the 100mi / 160km “long route” and the 50mi / 80km “medium route”. All riders are chip-timed and prizes will be awarded to the race winners overall and in age groups.

Shaun Gad, CEO of the organizing company, Paradise Sports Management, says: “The whole island is involved in GFNY Cozumel. We’re not a corporation coming here, putting on a race and leaving. GFNY Cozumel truly is made in Cozumel. Being part of the GFNY World series puts our granfondo in front of Gran Fondo New York’s huge international audience which was a massive advantage in getting the word out. Cozumel is becoming a top destination for the world’s most ambitious as well as recreational athletes.”

“We came to Cozumel for the first time in 2009 and immediately fell in love with the island,” adds Lidia Fluhme, President of Gran Fondo New York. “Cozumel’s warm climate, bike-friendly roads and warm people make it the ideal early winter getaway for any cyclist. It’s an honor for us to host a GFNY event there.”

Campagnolo Gran Fondo New York’s goal is to bring GFNY WORLD events into countries that are particularly strongly represented at Campagnolo Gran Fondo New York or are hotbeds for cycling. Whether it’s a new or an already existing event, each is required to adhere to the standards of a true Gran Fondo: they must have road closures or police-moderated intersections to allow riders the right of way, individual chip timing and rankings based on finish time. All GFNY events also offer a consistent high-quality experience, ensuring cyclists have a safe, challenging and enjoyable experience from start to finish.

Next stop on the GFNY World tour will be GFNY Puerto Rico on February 15, 2015.

The 5th annual Campagnolo Gran Fondo New York on May 17, 2015 will also be the GFNY Championship. The race features the world’s most international peloton with riders from over 70 countries and 48 US states. Athletes will take on a challenging 100-mile route from NYC to Bear Mountain and back to compete against each other, the clock and themselves in a personal endurance challenge. The 50-mile GFNY BEAR on the same day is a non-competitive ride from NYC to Bear Mountain. New for the 2014-2015 season, GFNY WORLD features events in Italy, Mexico, Puerto Rico, Colombia, Spain and France. Campagnolo Gran Fondo New York raises funds for Operation Smile, the international children’s medical charity. The official Grand Fondo New York website is: www.granfondony.com.