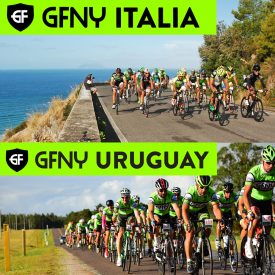 GFNY Italia kicks off with a spectacular uphill time trial on Friday March 17. The start will be in the historic village of San Felice Circeo situated on a rock above the Thyrennean Sea. The course then climbs on Via Acropoli in the Circeo National Park up to the Bellavista.

Saturday March 18 offers a fast 60km road race stage along the famous beaches of Sabaudia with a climb to the finish in San Felice Circeo.

The classic 130km Gran Fondo with 2087m of climbing rounds out the 3-day race on Sunday March 19. Now in its fourth year, the organizers added the infamous Querce climb which used the be the favorite training ground for the notorious Marco Pantani.

This year’s race starts and finishes in the heart of Punta del Este from where it follows the same 180km course as last year. After following the South Atlantic shore, the route turns inland where the numerous hills add up to a formidable challenge: 2000m of climbing.

The 7th annual Campagnolo GFNY World Championship New York will be held on May 21, 2017. The race features the world’s most international peloton with riders from 97 countries. Athletes take on a challenging 100-mile route from NYC to Bear Mountain to Fort Lee to compete against each other, the clock and themselves in a personal endurance challenge.