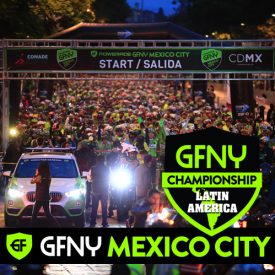 NEW YORK CITY, March 23, 2017 – The first-ever GFNY Regional Championship takes place in Mexico City with the GFNY Latin America Championship this Sunday, March 26. The race starts in the heart of the Latin metropolis and finishes in the mountains above the city. World record: none of the three larger metropolises than Mexico City has a mass participation bike race.

“The GFNY Championship Latin America is going to be a powerful experience,” said GFNY CEO Uli Fluhme. “Mexico City is Latin America’s unofficial capital so it was the obvious pick for us for the inaugural Regional Championship. Every time we’re in Mexico we’re inspired not just by the people’s warmth and hospitality but also their enthusiasm for bike racing.”

Riders from all across Latin America and well beyond compete for the elusive crown to be GFNY Queen and King of Latin America. It’s a championship-worthy course: 130km with 2,319m of climbing. Locals have a particular home advantage: being used to racing at altitude. But so are the Colombians who are notorious for being fierce competitors across GFNY World races. Any flatlanders who have not had the chance to acclimate for days (or better weeks), will be hard pressed to be worthy contenders.

But while just a few riders are in the hunt for the overall win, there are many aiming to qualify for a racer corral spot at the Campagnolo GFNY World Championship in NYC on May 21, 2017. While GFNY World events grant these exclusive slots to all finishers in the top 10% of their category, the more competitive Regional Championships extend this to 20%.