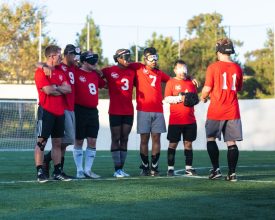 November 3, 2022/ENDURANCE SPORTSWIRE/ – The U.S. Association of Blind Athletes (USABA) today announced the 10 athletes chosen for the first-ever USA Blind Soccer Men’s National Team that will begin international competition in 2023, the first step on the journey to competing at the Los Angeles 2028 Paralympic Games. The team was selected after a four-day selection camp held Oct. 27-30 in Chula Vista, Calif. The roster features eight athletes with visual impairments along with two sighted goalkeepers.

“In the next six years, the world’s two biggest sporting events will happen on American soil,” said USABA CEO Molly Quinn. “In 2026, the FIFA World Cup will be played throughout the U.S. for the first time in three decades. In 2028, the Summer Olympic and Paralympic Games will take place in Los Angeles. It will mark the first time that L.A. has played host to the Paralympic Games.”

“We are so excited to name the first ever USA Blind Soccer Men’s National Team,” said Head Coach Katie Smith. “It was incredible to see the growth of the athletes at this first national selection camp. It is truly incredible being a part of this revolutionary team and to have another Paralympic sport for blind athletes all over the country to aspire toward. I look forward to seeing how this National Team progresses toward our goal of the 2028 Paralympics.”

Beckman, 30, has played soccer since the age of 6 and has also been involved in swimming, wrestling, track, beep baseball, hockey and goalball. He became active with blind soccer in 2018 and has participated in numerous USA Blind Soccer talent identification camps. Beckman also coaches a local blind school’s youth soccer club. In high school, Beckman placed individually in several wrestling, track and swimming events and led his goalball team to a second-place finish in the conference. As an adult, he led his goalball teams at the USABA National Championships with a final-four finish in 2016 and a runner-up finish in 2019. Beckman plays beep baseball with the Chicago Comets and practices regularly with a blind hockey program in Columbus.

Kirchner, 33, fell in love with blind soccer the moment he stepped on the pitch and found he could run without being stopped or held back. Since that day he has dreamed of earning a spot on the U.S. National Team and one day competing for a Paralympic medal. Kirchner wrestled in middle school and high school before being introduced to goalball when he transferred to a blind school and competed on the New Jersey Thunder Goalball Team. He also played beep baseball for the Philadelphia Fire.

Shareef, 25, dreamt of playing soccer from a young age, but at age 7 he had his eyesight and right arm taken from him by a bomb in his hometown of Baghdad, Iraq. Brought to the U.S. by the Global Medical Relief Fund charity, Shareef attended his first USABA blind soccer camp in 2019 and it has rekindled his aspirations of playing soccer once again.

Castaneda, 22, became blind at the age of 15 and has participated in judo, wrestling, goalball, triathlon track & field, beep baseball and swimming. He earned 2017 Most Valuable Player honors in track at the Northwest Regional competition and was defensive MVP in beep baseball at a tournament in Chicago in 2021. He has also served as captain of the Texas School for the Blind wrestling team where he qualified for regionals in 2018 and took first place in the 160-pound division for three straight years in the conference tournament.

Kevin Brown, 50, has been legally blind since the age of 7. He competed in soccer and other mainstream sports through high school and college and continued to participate in USA Track & Field events following graduation. He held the USATF record in the pentathlon and is currently a member of the U.S. National Blind Hockey Team. Brown has also served as a coach for soccer, basketball, football, track & field and hockey.

David Brown, 30, is a three-time Paralympian in track and field, winning a gold medal in the 100 meters at the Rio 2016 Games. He is also a three-time world champion and world record holder in both the 200 meters and 100 meters where he became the first totally blind athlete to run under 11 seconds. In high school, Brown participated in track, wrestling and goalball.

For Mora Arellano, 35, soccer has always been his first love. As a young boy, he dreamt of being on a real soccer field dribbling the ball as part of a team. He was introduced to goalball as a teenager in Mexico and liked the sport because of its similarities to soccer. Mora Arellano attended his first blind soccer clinic in 2019 after seeing an invitation in the USABA monthly newsletter and has attended several talent identification camps over the past three years.

After graduating high school as the scholar-athlete of the year, Herron, 21, played soccer for Daytona State College where they had two back-to-back national championship appearances. This past summer, as the goalkeeper for USL2 Virginia Beach United, Herron received votes for save of the week, save of the month and save of the year. At the end of the summer, he received an opportunity to play in Madrid, Spain, where he drew interest from 2nd and 3rd division teams.

Knott, 36, was a multi-sport athlete through high school and college. Soccer was one of five sports Knott played while attending high school in Virginia Beach, Va. During his collegiate career at Longwood University, James Madison University and Mars Hill University, he was a cross-country runner, diver, triathlete and cyclist. Knott was the first-ever cycling national champion at Mars Hill in 2011. At the 2016 UCI Track Cycling World Championships, he piloted the tandem for Team USA and won national titles in the BVI tandem road race and BVI kilometer time trial while racing with Chester Triplett and Davian Robinson. Knott has been playing indoor and outdoor soccer at the competitive amateur level and plans to be a volunteer goalkeeper coach at Brevard College in North Carolina where he is pursuing his master’s degree in health and human performance with a concentration in coaching.

Alternates for the USA Blind Soccer Men’s National Team are John Marquez (Fort Worth, Texas) and Charles Catherine (Brooklyn, N.Y.). The team will begin competing in international friendlies in 2023.

About U.S. Association of Blind Athletes
The mission of USABA is to empower Americans who are blind or visually impaired to experience life-changing opportunities in sports, recreation, and physical activities, thereby educating and inspiring the nation. A member organization of both the United States Olympic & Paralympic Committee (USOPC) and U.S. Soccer, USABA is certified by the USOPC as the national governing body for the Paralympic team sports of goalball and blind soccer. Since its founding in 1976, USABA has reached more than 100,000 individuals through its multi-sport programming. The organization has emerged as more than just a world-class trainer of blind athletes, it has become a champion of the abilities of Americans who are legally blind. In 2022, USABA expanded its offerings of endurance sports events with the launch of its Team Tethered Together program for visually impaired runners and their guides. Learn more at www.usaba.org.