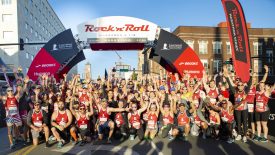 Among the runners were more than 3,000 St. Jude Heroes who committed to raising funds and awareness for the hospital while training for the race.

This year marked the 20th running of the marathon and is the eighth year of St. Jude Children’s Research Hospital as the title partner. Throughout these eight years, St. Jude Heroes have raised more than $10 million for the hospital through this event.

“The St. Jude Rock ‘n’ Roll Nashville Marathon & 1/2 Marathon is a shining example of engaged communities – the greater Nashville-area community, the global fitness and wellness community and charitable community – coming together to create significant impact for the children of St. Jude,” said Richard Shadyac Jr., President and CEO of ALSAC, the fundraising and awareness organization for St. Jude Children’s Research Hospital. “The sea of St. Jude Hero singlets worn by our fundraisers and representing our mission this weekend in Nashville and the thousands of supporters cheering was humbling, gratifying and motivating to all of us, and was a visual reminder of the spirit and commitment of our many generous supporters.”

In addition to the various activities tied to the race, the weekend also featured the NFL Draft, in which two St. Jude patients and a St. Jude Hero each announced a pick on behalf of St. Jude. Runner, football fan and St. Jude patient Owen announced the Seattle Seahawks’ round second draft pick. Owen is a proud Seattle Seahawks fan, which he attributes to the influence of his “favorite” uncle who resides in Seattle.

For this marathon, St. Jude Heroes will fundraise through May 28. For more information, visit stjude.org/heroes or RunRocknRoll.com/Nashville.

St. Jude Children’s Research Hospital is leading the way the world understands, treats and defeats childhood cancer and other life-threatening diseases. Its purpose is clear: Finding cures. Saving children.® It is the only National Cancer Institute-designated Comprehensive Cancer Center devoted solely to children. Treatments invented at St. Jude have helped push the overall childhood cancer survival rate from 20 percent to more than 80 percent since the hospital opened more than 50 years ago. St. Jude won’t stop until no child dies from cancer. St. Jude freely shares the discoveries it makes, and every child saved at St. Jude means doctors and scientists worldwide can use that knowledge to save thousands more children. Families never receive a bill from St. Jude for treatment, travel, housing or food – because all a family should worry about is helping their child live. Join the St. Jude mission by visiting stjude.org, sharing stories and videos from St. Jude Inspire, liking St. Jude on Facebook, following St. Jude on Twitter and Instagram and subscribing to its YouTube channel.

The Rock ‘n’ Roll Marathon Series® is the world’s largest running series taking part in over 30 destination events around the world every year. Established in 1998, the Rock ‘n’ Roll Marathon Series simple idea of making running fun has transformed both the U.S. and global running landscape by infusing the course with live bands, cheer teams and entertaining water stations, creating a block-party atmosphere for participants and spectators alike. Focused on running, music and community, race weekend kicks off with a free Health & Fitness Expo showcasing the latest in running gear, sports apparel, health and nutritional information and much more. Events culminate with an entertaining finish-line festival featuring some of the biggest names in music, with past performances including Macklemore & Ryan Lewis, O.A.R. Aloe Blacc, Pitbull, Flo Rida, The Band Perry, Fitz and the Tantrums, the Goo Goo Dolls and Bret Michaels. Further information about the Rock ‘n’ Roll Marathon Series can be found online at www.RunRocknRoll.com and follow @RunRocknRoll on all social platforms.

As part of Wanda Sports Holdings, the IRONMAN Group operates a global portfolio of events that includes the IRONMAN® Triathlon Series, the IRONMAN® 70.3® Triathlon Series, 5150™ Triathlon Series, the Rock ‘n’ Roll Marathon Series®, Iron Girl®, IRONKIDS®, International Triathlon Union World Triathlon Series races, road cycling events including the UCI Velothon® Series, mountain bike races including the Absa Cape Epic®, premier marathons including the Standard Chartered Singapore Marathon, trail running like Ultra-Trail Australia™, and other multisport races. IRONMAN’s events, together with all other Wanda Sports Holdings events, provide more than a million participants annually the benefits of endurance sports through the company’s vast offerings. The iconic IRONMAN® Series of events is the largest participation sports platform in the world. Since the inception of the IRONMAN® brand in 1978, athletes have proven that ANYTHING IS POSSIBLE® by crossing finish lines at the world’s most challenging endurance races. Beginning as a single race, IRONMAN has grown to become a global sensation with more than 230 events across 53 countries. For more information, visit www.ironman.com.

Criminal Investigation Looks at the Financial Relationship Between USATF and Nike

Study finds reverse running to be a fitness trend in 2022

Nike Doubles Down on Mental Health