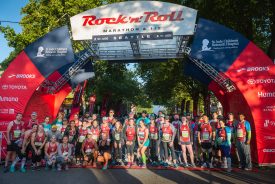 Among the anticipated 15,000 participants in this year’s event will be more than 800 St. Jude Heroes who have committed to fundraising for the hospital while they train. Last year the group of supporters raised more than $185,000 for the kids at St. Jude.

St. Jude is a national children’s hospital with a global mission to find new and better treatments for childhood cancer and other life-threatening diseases. St. Jude treats children from all 50 states, including Washington, and around the world.

Support from events such as Rock ‘n’ Roll Marathon Series have helped ensure families never receive a bill from St. Jude for treatment, travel, housing or food – because the only thing a family should worry about is helping their child live.

This year marks the 11thanniversary of the race and the second year of St. Jude Children’s Research Hospital as the title partner. The event weekend features a marathon, half marathon and 5K, and is just one of the many fitness events across the globe individuals can participate in as St. Jude Heroes.

In spring of 2018, Ryan decided to take up running to get healthy, and resolved to run a half marathon in November at the Rock ‘n’ Roll Las Vegas Marathon & ½ Marathon as a St. Jude Hero. Having been diagnosed with HIV a few years ago, running on behalf of St. Jude was especially meaningful for Ryan knowing the hospital’s contributions to HIV research. By his first race, Ryan had lost more than 60 pounds, increased his race distance to the full marathon and even participated in a 5K the day before. After completing the race and realizing his potential, Ryan committed to running all 15 domestic Rock ‘n’ Roll Marathon Series races in 2019 as a St. Jude Hero.

As Sarah planned to run her 40thhalf marathon last year, she decided to do more with this milestone race by running for a reason as a St. Jude Hero. She was inspired to run for St. Jude by her mother, who is a two-time cancer survivor. Sarah and her family witnessed the emotional and financial toll of the treatments, and could not imagine a child facing a similar diagnosis. Since her 40thhalf marathon, she has continued to support St. Jude through regular volunteering at local events. Sarah will participate in the 5K this year, and has already exceeded her $3,000 fundraising goal. This success boosted her confidence to do even more for the hospital, prompting her to recruit a number of her co-workers to participate as St. Jude Heroes.

Nicole Hughes’s support of St. Jude Children’s Research Hospital has constantly evolved over the years. Nicole first learned about the institution’s global reach in college when she joined Tri Delta, which named St. Jude its chosen philanthropy 20 years ago. She devoted much of her extracurricular time to raising awareness for the hospital’s mission with her sorority sisters through letter-writing campaigns, fundraising events and more. After college, her involvement with St. Jude evolved into serving in national leadership roles with Tri Delta. Shortly after, she started fundraising for the hospital through fitness events. Nicole has participated in a variety of events across the country, such as the St. Jude Walk/Run and St. Jude Memphis Marathon Weekend. She has already achieved her $1,000 fundraising goal for this year’s race, and has already formed a National Tri Delta team of St. Jude Heroes for the St. Jude Memphis Marathon Weekend this December.

Six years ago, Curtis began running as a way to combat his diabetes and high cholesterol. Not long after, he chose to do more with his fitness journey by running for a reason. Four years ago, he ran his first full marathon as a St. Jude Hero at St. Jude Rock ‘n’ Roll Seattle. As a father of three daughters, Curtis understands how grateful he is for his healthy children and the importance of giving back to those who are not. “I’m not running just to keep myself alive, I’m running to keep someone else alive, to keep a family together,” Young said. Curtis has already surpassed his fundraising goal for this year’s race, having raised nearly $5,000. He also recruited his friends to participate with him as St. Jude Heroes and formed a team with the goal to raise at least $10,000 for the kids of St. Jude.

St. Jude Children’s Research Hospital is leading the way the world understands, treats and defeats childhood cancer and other life-threatening diseases. Its purpose is clear: Finding cures. Saving children.®It is the only National Cancer Institute-designated Comprehensive Cancer Center devoted solely to children. Treatments invented at St. Jude have helped push the overall childhood cancer survival rate from 20 percent to more than 80 percent since the hospital opened more than 50 years ago. St. Jude won’t stop until no child dies from cancer. St. Jude freely shares the discoveries it makes, and every child saved at St. Jude means doctors and scientists worldwide can use that knowledge to save thousands more children. Families never receive a bill from St. Jude for treatment, travel, housing or food – because all a family should worry about is helping their child live. Join the St. Jude mission by visiting stjude.org, sharing stories and videos from St. Jude Inspire, liking St. Jude on Facebook, following St. Jude on Twitter and Instagram and subscribing to its YouTube channel.

The Rock ‘n’ Roll Marathon Series® is the world’s largest running series taking part in over 30 destination events around the world every year. Established in 1998, the Rock ‘n’ Roll Marathon Series simple idea of making running fun has transformed both the U.S. and global running landscape by infusing the course with live bands, cheer teams and entertaining water stations, creating a block-party atmosphere for participants and spectators alike. Focused on running, music and community, race weekend kicks off with a free Health & Fitness Expo showcasing the latest in running gear, sports apparel, health and nutritional information and much more. Events culminate with an entertaining finish-line festival featuring some of the biggest names in music, with past performances including Macklemore & Ryan Lewis, O.A.R. Aloe Blacc, Pitbull, Flo Rida, The Band Perry, Fitz and the Tantrums, the Goo Goo Dolls and Bret Michaels. Further information about the Rock ‘n’ Roll Marathon Series can be found online at www.RunRocknRoll.com and follow @RunRocknRoll on all social platforms.

As part of Wanda Sports Holdings, the IRONMAN Group operates a global portfolio of events that includes the IRONMAN® Triathlon Series, the IRONMAN® 70.3® Triathlon Series, 5150™ Triathlon Series, the Rock ‘n’ Roll Marathon Series®, Iron Girl®, IRONKIDS®, International Triathlon Union World Triathlon Series races, road cycling events including the UCI Velothon® Series, mountain bike races including the Absa Cape Epic®, premier marathons including the Standard Chartered Singapore Marathon, trail running like Ultra-Trail Australia™, and other multisport races. IRONMAN’s events, together with all other Wanda Sports Holdings events, provide more than a million participants annually the benefits of endurance sports through the company’s vast offerings. The iconic IRONMAN® Series of events is the largest participation sports platform in the world. Since the inception of the IRONMAN® brand in 1978, athletes have proven that ANYTHING IS POSSIBLE® by crossing finish lines at the world’s most challenging endurance races. Beginning as a single race, IRONMAN has grown to become a global sensation with more than 230 events across 53 countries. For more information, visit www.ironman.com.

ASICS introduces tool to measure running’s effect on the mind