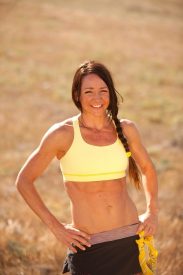 Her quest starts Monday, July 23, at 11 pm in Death Valley when she lines up at the Badwater Ultramarathon.

Huntington Beach resident and Champion Women’s Ultramarathoner Sally McRae has a goal to be the first Women in history to compete in the World’s two toughest endurance races, back to back. Her quest starts this Monday, July 23, at 11 pm in Death Valley when she lines up to start the Badwater Ultramarathon.

Described as “the world’s toughest foot race, Badwater is a 135-mile course (217 km) starting at 279 feet (85 m) below sea level in the Badwater Basin, in California’s Death Valley, and ending at an elevation of 8360 feet (2548 m) at the Whitney Portal, the trailhead to Mount Whitney, the highest mountain in the continental United States. It takes place annually in mid-July, when the weather conditions are most extreme. Temperatures can reach 130 °F (54 °C). Consequently, very few people – even among ultramarathoners – are capable of finishing this grueling race.

Racers participate by invitation only, and Sally will line up with 98 other Elite Competitors for the Start (32 Women and 67 Men). The course record for Men is (time) and Women is (time) with racers finishing up until (hours) later. Projected race day temperatures for Tuesday, July 24 are 118. Just finishing is an amazing accomplishment.

5 weeks later, Sally will be racing in the Ultra Trail du Mont Blanc in Chamonix, France, the most difficult trail race in the World. To date, no other Female has attempted this back to back feat.

UTMB starts and finishes in Chamonix France, and follows the route of the Tour du Mont Blanc, through France, Italy and Switzerland.  The distance is 170 kilometers (105 mi), and a total elevation gain of around 10,000 m. It is widely regarded as the most difficult foot race in the world, and one of the largest with more than 2,300 starters. The races have strict entry requirements which include accumulating race points through qualifier races in the previous two years.

Sally, whose Social Media moniker is #YellowRunner, has overcome many significant obstacles in her life to become a professional Ultramarathoner.  She is attempting this feat to show what the human body can accomplish, and to help inspire others via a “Climb Your Mountain” campaign developed by Sally, Filmmaker Brandon Flint, and supported by O2 Health Labs. View the film here: https://vimeo.com/273607406/a0e2802c11

Sally has been racing professionally as an ultramarathoner for over 5 years, specializing in 100-mile mountain races. She trains in her local mountains and travels all over the world as a Nike athlete competing in the toughest foot races on the planet.  She is sponsored by Nike, Spring Energy, LIQUIDI.V. and O2 Health Lab.

When not running, Sally is an in-demand Motivational Speaker, running consultant, owns a coaching and fitness training business, and is currently writing her first book. Additionally, Sally is a Nike Run Club Coach and is one of the featured voices of Nike+Running App under Audio Guided Runs. She currently resides in Huntington Beach with her husband Eddie and two children, Makenzie and Isaiah.

View all Releases by O2HealthLab