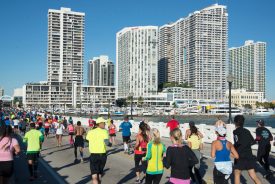 They are NFL Football players, supremely conditioned athletes. But everything they do is built around performance in five-second increments. Their muscles have been developed to maximize fast twitch movements, sudden bursts and explosion.

The typical NFL skill position player will run slightly over one mile in a game. Their training is different than a World Cup soccer player who runs about seven miles over 90 minutes or a NHL hockey player who skates four or five miles in a game. NBA players run two or three miles in 48 minutes on the court. A tennis player can cover three miles in a hard-fought match. But none of those sports compare to the endurance test of a 13.1-mile Half Marathon or 26.2 mile Full Marathon.

So that’s the motivation behind New York Jets defensive back Buster Skrine and five of his NFL playing friends coming to Miami January 27 to run in one of Life Time’s iconic events, the 2019 Fitbit Miami Marathon and Half Marathon. They want to test their fitness and bodies in a different type of stadium, a street course through Downtown Miami and South Beach, and they want to raise money for children’s charities while they are at it.

Skrine, Jets’ teammates Leonard Williams, Henry Anderson, Robbie Anderson, Terrence Brooks and Marcus Maye and the Chicago Bears’ Marcus Williams will run the 13.1 mile Half Marathon distance across the MacArthur Causeway and through South Beach before returning to the finish line in downtown Miami.

The players will be running to raise funds for the Boys & Girls Clubs of Atlanta and New York for school supplies, healthy resources, and to give them a Super Bowl Party of their own. The Miami Marathon Expo, presented by Technogym, will also host an autograph signing on Saturday, January 26. All the athletes will sign from 12:30 – 2:30 pm, and the full proceeds of collected donations will be donated to support the Life Time Foundation which partners with school districts and food service professionals to eliminate highly processed and artificial foods in favor of wholesome, real alternatives. 100% of every dollar raised will remain in the Miami/South Florida area to accelerate the mission of helping children to live healthy, happy lives in a community that currently has the 13th highest metropolitan obesity rate for youths.

“I’m always up for challenges,” said Skrine, who is also taking on the challenge of building his own marketing agency, Versatile NYC, which is organizing the weekend events in Miami for the players. “This is my first marathon. I’m already looking to set goals for the next one.”

“It’ll be a first for me,” said Brooks, a native of Dunnellon, FL who played college ball at Florida State University. “Getting the chance to come back home and surround myself with motivated, determined people and great energy is an amazing opportunity. I can’t wait.”

Perhaps nobody will face a greater challenge than Williams, a 300-pound defensive end.

“I’m probably the biggest guy in the race,” said Williams, who grew up in Daytona Beach, FL and played college ball at USC. “This is my first time running in a marathon, but I’m up for the challenge.

“Anything for the kids. I want them to know that no challenge is too big to overcome.”

The players are receiving donations toward their training and adventure from four different athletic facilities in New York and South Beach and will donate the money to the Boys & Girls Club of Atlanta during Super Bowl week in Atlanta. The facilities include Life Time at Sky in Midtown Manhattan, the Mile High Club on the Upper East Side, Rise Nation in Miami and Barry’s Boot Camp on South Beach. On Running, a shoe and clothing company, is another sponsor.

Skrine, who grew up near Atlanta, is throwing a surprise Super Bowl party at the Boys & Girls Club there and buying school supplies for all of the kids. He is a big believer in giving back. The New York hotspot Goldbar had a toy drive for underprivileged kids for Christmas and only collected 100 toys. Skrine heard about it and donated 500 more, also showing up to the event where the kids received the toys.