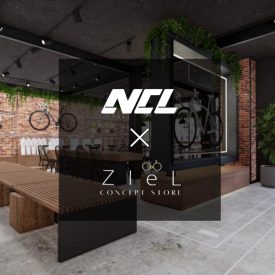 The two companies will collaborate on a range of initiatives and experiences around the development and showcasing of professional & amateur cycling as a sport, cycling culture in general as a lifestyle and develop a fanatic community. ZIeL offers South Florida cyclists a cycling club, professional bike servicing, in a modern sophisticated environment curated with the best professional cycling and lifestyle products.

“With the city of Miami Beach, being our inaugural NCL race city, collaborating with the ZIeL Concept Store community was a perfect fit,” said Paris Wallace NCL Founder & CEO. “We were looking for a local partner for our base of operations for the Miami Nights CC, who shared our values of building a diverse & inclusive cycling culture ZIeL, as the preeminent hub for the professional, amateur and casual cycling enthusiasts’ community in Miami matched up perfectly with our goals.”

ZIeL will support NCL riders and fans as the Headquarters for the NCL Miami Beach race and year-round as the club house for Miami’s NCL team, the Miami Nights CC. Leading up to NCLs April race in Miami Beach and throughout the 2023 Miami Nights’ season, cyclists and fans will be invited to ZIeL for group riders, clinics, and special events.

“ZIeL is a hub for cyclists to train, recover, shop, service their bikes, and learn about the latest trends and tech in the sport, surrounded by people who are passionate about cycling,” said Miami Nights rider, Frank Travieso. “I’m looking forward to the well-earned post ride recovery coffee at ZIeL with my Miami Nights CC teammates and my fellow cyclists after one of the NCL/ZIeL training rides leading up to NCL Miami Beach 2023.”

“Our mission is to honor the sport of cycling and the lifestyle and nourish its culture. We’re committed to helping people access and fall in love with the sport and the lifestyle – whether it is by finding their dream bike, training them to become the best athlete they can possibly be or simply by leading a damn good ride” said ZIeL founder Enrique Romero. “So, the opportunity to partner with the NCL whose mission completely aligned with ours of developing cycling as a sport, a lifestyle and a community was the perfect synergy.”

The NCL will launch in 2023 with 10 teams (invite-only) of professional cyclists competing for a record-setting $1 Million prize purse across a series of criterium-style races in four major markets: Miami Beach, Fla.; Atlanta, Ga.; Denver, Colo.; and Washington D.C. In 2024, the National Cycling League will expand to a planned eight (8) markets nationally.

Born from the love for cycling culture, ZIeL is the combination of everything we’re deeply passionate about. From hammer rides to Cafecito stops, cooling down with beers and sharing experiences on and off the bike. At ZIeL, we strive to share this lifestyle through the culture of cycling, combined with coffee, beer, wine & gourmet food.