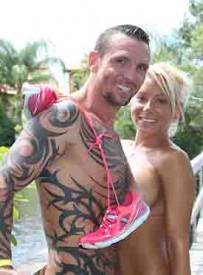 More than 400 runners representing at least 19 states are expected on Sunday, May 4, 2014 for the Caliente Bare Dare 5K, a fifth-annual clothing-optional race in Land O’Lakes, Florida that determines the National Championship of Nude Running.

The race, which debuted in 2010, is among the largest clothing-optional races in North America and attracts top endurance athletes from around the United States, producing course-record times (15:58 male, 19:25 female), comparable to those of much larger runs.

The single-loop course takes runners around the upscale, tropical, 125-acre grounds of the Caliente Resort, a clothing-optional property that features a 30,000 square foot clubhouse, five swimming pools, a 40-room hotel and dozens of rental condos. As part of their race entry fee, runners receive all-day admission to Caliente, located just north of Tampa in Pasco County. Many athletes make a day or even a weekend out of the race, which has attracted runners from an average of 15 states in each of its first four years. Runners from 19 states, including Hawaii, Montana, and California, have registered for the 2014 Caliente Bare Dare 5K.

Though nudity is not required to compete, more that 85 percent of athletes run in only shoes and sunscreen. Women have accounted for 38 percent of participants in the Caliente Bare Dare 5K, slightly above the 35 percent average for typical 5K races. In the interest of privacy, race organizers do not reveal participants/winners or post results, though a number of journalists and bloggers have written about their experiences.

Jessica Sebor, the editor of Women’s Running magazine, won the female division of the Caliente Bare Dare 5K/National Championship of Nude Running in 2012 and wrote about the experience.

“I know it’s going to take more than one Sunday morning to cure my self-consciousness,” she wrote about running nude. “But running the Bare Dare did teach me this: If you don’t challenge yourself, you will never have the chance to be crowned a champion.”

Registration for the Caliente Bare Dare 5K is available at www.baredare5k.com.