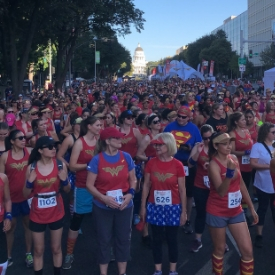 Evening event will feature a 5K and 10K on Saturday, October 13

“We’re thrilled to bring a new and inspiring Wonder Woman experience to our fans,” said Maryellen Zarakas, senior vice president of franchise management and marketing for Warner Bros. Consumer Products. “Together with the team behind the DC Wonder Woman Run Series, we are excited to give fans the ultimate Super Hero event experience.”

Designed to empower the hero in all, the DC Wonder Woman Run Series in Oakland will feature both a 5K and 10K starting and finishing on the steps of iconic Oakland City Hall. Runners and walkers will experience a beautiful, entertainment filled course along Lake Merritt, passed the historic Fox Theater and through the heart of Old Oakland and Uptown.

“Oakland is excited to host such an empowering event, and welcomes visitors and locals to celebrate the hero in us all within our beautiful city,” said Mark Everton, CEO of Visit Oakland. “I encourage participants to spend some time exploring around town, and experience all that our city has to offer.”

The Oakland event will kick off with an expo, where participants will be able to collect their race packets and bib numbers, as well as purchase exclusive Wonder Woman merchandise. On race day, the DC Wonder Woman Run Series will offer music and entertainment along each of the scenic course routes, which will wind through beautiful parks, historical sites, and vibrant urban areas. The one-of-a-kind race experience will culminate with a finish line festival for both participants and spectators.

For more information on the DC Wonder Woman Run Series, please visit the website at dcwonderwomanrun.com.

The DC Wonder Woman Run Series is a series of 5K and 10K road races in the United States designed to empower the Super Hero in all runners and walkers, regardless of their abilities. Organized by SON Events, the Series races through Sacramento, Oakland, San Jose, Los Angeles, and San Diego this fall. Join us by visiting dcwonderwomanrun.com.

Warner Bros. Consumer Products (WBCP), a Warner Bros. Entertainment Company, extends the Studio’s powerful portfolio of entertainment brands and franchises into the lives of fans around the world.  WBCP partners with best-in-class licensees globally on an award-winning range of toys, fashion, home décor, and publishing inspired by franchises and properties such as DC, The Wizarding World, Looney Tunes and Hanna-Barbera. The division’s successful global themed entertainment business includes groundbreaking experiences such as The Wizarding World of Harry Potter and Warner Bros. World Abu Dhabi (opening 2018). With innovative global licensing and merchandising programs, retail initiatives, promotional partnerships and themed experiences, WBCP is one of the leading licensing and retail merchandising organizations in the world.

DC Entertainment, home to iconic brands DC (Superman, Batman, Green Lantern, Wonder Woman, The Flash), DC Vertigo (Sandman, Fables) and MAD, is the creative division charged with strategically integrating across Warner Bros. and WarnerMedia. DC Entertainment works in concert with many key Warner Bros. divisions to unleash its stories and characters across all media, including but not limited to film, television, consumer products, home entertainment, and interactive games. Publishing thousands of comic books, graphic novels and magazines each year, DC Entertainment is one of the largest English-language publishers of comics in the world.