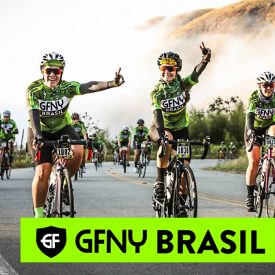 In a hotly contested men’s race, Leonardo Aguiar came out as champion, covering the 160km distance in 4hrs 20minutes and 19seconds. He held off last year’s winner, Antônio “Pipo” Garnero (BRA) and challenges from Anderson Zomer (BAR) who took second place in 4:21:02. Natan Mahler (BRA) rounded out the podium a further 28 seconds back.

“It was a tough race with demanding climbs and a high level of competition. I went in visualizing each pedal stroke, every kilometer and it all came together on the day,” says Aguiar, who last year came 7th.

In the women’s race Victoria Martins Reimali was racing in her debut GFNY. Leading all the way she took the win in 4hrs 49minutes and 06seconds. Second place was Maria Camila Gianella (BRA) in 4:51:19, and Daniela Genovesi (BRA) in 4:51:45.

“I am delighted to take my first GFNY title. It was a great race on a beautiful but very challenging course. I tried to stick to my strategy of staying ahead of the women’s group and think about my race rather than worry about the other competitors and it worked perfectly,” said Reimali.