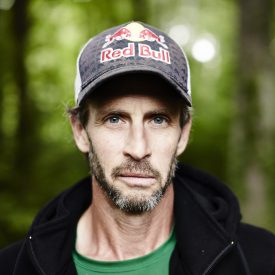 Karl Meltzer is an icon in ultra-long distance running and is recognized worldwide as the most successful 100-mile runner on the planet. Known as the “Speedgoat” (due to his prowess in high mountain running), Karl has 39 100-mile wins to his credit, which is more titles at this distance than any other man or woman. However, his versatility has shown as he has set several distance records in the past. In 2010, he was the first human to run the entire length of the famed Pony Express Trail, which stretches 2,064 miles, from Sacramento, CA to St. Joseph, MO. The accomplishment was a FKT (first known time), which took exactly 40 days. However, his most impressive feat was his record setting Appalachian Trail thru-hike speed record, in which he completed an absolutely grueling 2,190 miles in 45 days, 22 hours, and 38 minutes. The successful world record attempt was the subject of the documentary film “Karl Meltzer: Made to be Broken”, which chronicled the blood, sweat, and tears (literally) behind his new benchmark time. In addition to racing, Karl coaches runners and hosts his own annual event, the Speedgoat 50K.

2018 marks yet another year of records as Karl looks to keep a more personal streak alive. “I’ve won at least one 100-mile race every year for the last 17 years.  I hope to keep the streak alive with a win at Franklin.  I’m excited to visit El Paso as it’s one of the only places to run a mountain race in the middle of winter!” If his dominant form, including a victory this past November, is any indication of his fitness there’s a good chance the streak revisits El Paso next year for #18!

“We’re very excited to have Karl join us at Lone Star 100 this year,” says TROT Race Director Rob Goyen. “This course is relentlessly challenging and Karl and the rest of our competitors will have a lot of fun at Franklin Mountains State Park.”

For more information about the Lone Star 100 and Trail Racing Over Texas, please contact Rob Goyen at rob@trailracingovertexas.com.

Through the Red Bull network, hi-res video and still images are captured and made immediately available for editorial use for all media channels including television, film, print, mobile, and digital. The content is centrally located in the Red Bull Content Pool for media partners.

For additional information or needs, please reach out to aj.avrin@redbull.com

View all Releases by Christopher Douglas