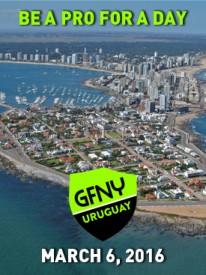 “Further expanding GFNY in Latin America has been a no-brainer given the interest in the region for GFNY,” says GFNY President Lidia Fluhme. “We’re expecting 1,200 Latin American cyclists at our NYC race alone. The GFNYs in Mexico, Colombia and Argentina have been an overwhelming success, there is a clear demand for more. We’re fortunate to receive many offers and we are careful to pick the best in order to satisfy our standards.”

All GFNY World events are true cycling marathons that offer cyclists start-to-finish timing, police-moderated course control, ranking based on finish time, age group awards, a consistent set of rules and a great tourism and family experience. GFNY is dedicated to providing cyclists a memorable and challenging cycling experience in unique locations and growing the global footprint of GFNY with more events.

“Having GFNY at Punta del Este will be the season highlight for riders from the Buenos Aires-Montevideo area as well as Brazilians. And it will certainly be a great experience for riders from around the world,” adds GFNY Uruguay founder Andres Borras. “With GFNY, we’re bringing competitive, international cycling to this South American hot spot.”

Registration for the race is available at gfnyuruguay.com.