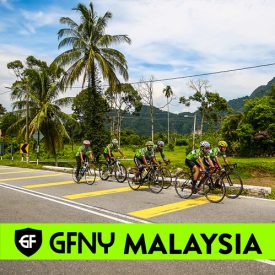 NEW YORK CITY, January 19, 2017 – The global cycling marathon series, GFNY, expands its brand in Asia with the inaugural GFNY Malaysia held on April 23, 2017. The adventure city of Ipoh will host athletes from all across Asia and the rest of the world.

“We’re excited to grow the GFNY footprint in Asia,” says GFNY President Lidia Fluhme. “After the great success of GFNY Indonesia this past October, the demand for more GFNY events in Asia has drastically increased. GFNY Malaysia will satisfy this demand much quicker than anticipated. And we won’t stop there.”

The host town, Ipoh, is the capital city of the state of Perak and is one of the biggest cities in Malaysia. It is 200km north of Kuala Lumpur with easy train access.

“We’re excited to host the prestigious GFNY World Series in Ipoh,” says Amin Jay of GFNY Malaysia. “Riders will enjoy not only a great and safe race but also all the attractions the area offers. We’re excited to bring cyclists from around the world to Malaysia.”

Registration for GFNY Malaysia is open now at http://www.gfnymy.com.