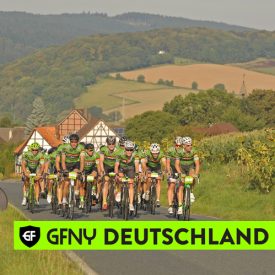 The 166k race was marked by numerous attacks. While no riders were able to gap the peloton definitively, each attack shrunk the group of contenders until a bunch of 10 tackled the last climb with 10km to go to the finish. At the end, Christian Zucker out sprinted Carlo Mario and won in 4:43:09h. Both riders were the freshest after having spent the day at the back of the lead group. Arne Frank completed the all-German podium.

“Racing on fully closed roads was phenomenal,” says GFNY CEO Uli Fluhme. “Being able to descent full gas and not having to expect a car is a unique privilege usually reserved for top professional races. GFNY Deutschland really allowed the riders to Be a Pro for a Day.”

While only few riders were in the hunt for the overall win, many aimed to finish among the top 10% of finishers in their category to qualify for a racer corral spot at the GFNY World Championship in NYC on May 21, 2017.

Next stop on the GFNY World calendar is the third annual GFNY Italia on September 18, an hour south of Rome. The race prides itself on being an authentic Italian granfondo experience, from the sea-hills-sea course to the enthusiastic, knife-between-the-teeth racers.