Inaugural GFNY Brasil to be held on August 6, 2017 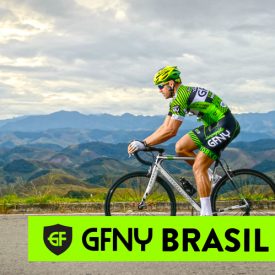 NEW YORK CITY, October 13, 2016 – The charming historic town of Conservatória, in the state of Rio de Janeiro, will host the inaugural GFNY Brasil. Conservatória, known for its stunning nature with rolling green hills, waterfalls and rainforest-covered mountains, is located in a picturesque region two hours north of Rio de Janeiro that was the heart of Brazil’s coffee industry in the mid-1800s.

Brazil is a particularly special nation for GFNY. On May 15, 2016, over 700 Brazilians tackled the Campagnolo GFNY Championship in NYC. For the second year, Brazil was the second-largest contingent at the NYC race after the host nation, USA.

“Cycling is one of the fastest growing sports in Brazil,” adds Luisa Juca. “As the leading producer of cycling events in Brazil with ten years of experience, we’re proud to host GFNY in our country. We look forward to receiving cyclists from all over Brazil and the world in one of the most beautiful and charming places of our state of Rio de Janeiro.’

Two distance options will challenge riders, a 160km / 100-mile competitive long course and a 72km / 45-mile medium non-competitive route for riders who want to experience GFNY but are not able to tackle the 160km long course.

A former coffee plantation will host the pre-race expo and post-race festivities. The grand estate is located in a beautiful setting in the countryside, with green pastures bordered by stretches of lush Atlantic rain forest.