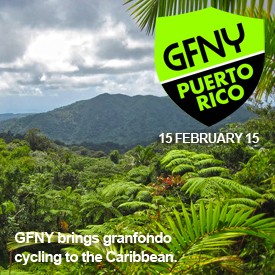 With GFNY Colombia on March 29, 2015, the GFNY World series comes to one of the most cycling-fanatic countries in the world. Colombian cycling hit the big stage in the 1980s when Lucho Herrera and Paco Rodriguez took the European tours by storm and showed the world that they are the best climbers. Now a masters rider, Paco Rodriguez will compete at Campagnolo Gran Fondo New York on May 18, 2014. After a draught over the past two decades, Colombian cycling is strong internationally once again. However, it never faded nationally.

“A few Colombian organizers made their bid to host GFNY Colombia,” explains Fluhme. “All of them have an incredible passion for cycling and were keen to provide Colombians a true granfondo experience as well as showcasing Colombian cycling to the world. We ultimately decided to work with Pablo Gonzalez because of his experience in organizing a granfondo and hosting the La Ruta Colombia in Bogota.”

Campagnolo Gran Fondo New York’s goal is to bring GFNY WORLD events into countries that are particularly strongly represented at Campagnolo Gran Fondo New York or are hotbeds for cycling. Whether it’s a new or an already existing event, each is required to adhere to the standards of a true Gran Fondo: they must have road closures or police moderated intersections to allow riders the right of way, individual chip timing and rankings based on finish time. All GFNY events also offer a consistent high-quality experience, ensuring cyclists a safe, challenging and enjoyable experience from start to finish.

The 4th annual Campagnolo Gran Fondo New York features the world’s most international peloton with riders from over 70 countries and 48 US states. The athletes take on a challenging 100-mile route from NYC to Bear Mountain and back to compete against each other, the clock and themselves in a personal endurance challenge. The 50-mile GFNY BEAR on the same day is a non-competitive ride from NYC to Bear Mountain, to celebrate the park’s 100th anniversary. New for the 2014-2015 season, GFNY WORLD features events in Italy, Mexico, Puerto Rico, Colombia, Spain and Brazil that lead up to the Championship in NYC on May 17, 2015. Campagnolo Gran Fondo New York raises funds for Operation Smile, the international children’s medical charity. The official Grand Fondo New York website is: www.granfondony.com.