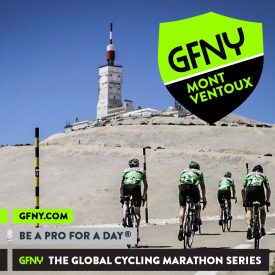 NEW YORK CITY, June 28, 2017 – The third edition of GFNY Mont Ventoux took place on Sunday, June 25. The race was sold out, with 2000 riders who were treated to a glorious day of iconic riding under blue skies and warm temperatures of 31C.

Set amid the charming provincial town of Vaison-la-Romaine, famous for its well-preserved 2000-year-old Roman ruins and medieval town and cathedral, GFNY Mont Ventoux offers beautiful scenery, vineyards and charming Provencal villages, which provides a dramatic setting for the challenge the riders take on.

“Mont Ventoux is a very tough climb that most fear, hence reaching the top provides a huge sense of pride. Along the way, riders are treated to a safe and smoothly operating event that makes them BE A PRO FOR A DAY, as GFNY’s slogan states.” Said Lidia Fluhme, co-founder and President of GFNY

The long distance event encompasses 130km over 3200metres of climbing including 3 Cols before the final ascent to the finish atop Mt. Ventoux. GFNY Mont Ventoux is the only open cycling race to finish on top of Mont Ventoux; all GFNY races are open to professionals and amateurs alike.

In the men’s race it was a close battle on the final climb up Mt. Ventoux with Kristof Houben from Belgium and defending champion, Alexander Duncan of Switzerland, riding side by side until the final 500 meters. Houben launched an attack with 500 meters to go and Duncan was unable to respond to the Belgian’s effort and Houben took the GFNY European Championship Mont Ventoux title in a time of 4:14:53h.  Nicolas Reynaud of France completed the podium just over a minute back.

In the women’s race, Stephanie Subercaseaux, from Chile rode away with the win in a time of 5:16:17h. She overtook Isabel Eizmendi (Spain) on the climb up Ventoux, which she started 8 minutes later and won by 2 minutes. Muriel Reggiani (France) finished third a further 3 minutes down.

GFNY World will head back to Provence on September 29 – October 1 for GFNY Provence, a 3-day stage race. It is GFNY’s second 3-day stage race of 2017 calendar year; the first was GFNY Italia in March.

Next up: GFNY World heads to South America and the inaugural GFNY Brasil on August 6.

At all GFNY events, riders have the chance to qualify for the elite racer corral at the GFNY World Championship in NYC by placing in the top 10% (20% at World and Regional championships) of their age group.