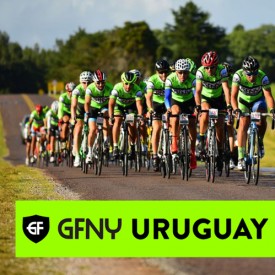 Punta is notoriously windy and conditions on race day were no different: gusts of up to 60km/h made the racing interesting. A compact peloton took the first 40km along the coast at high speeds. After numerous fruitless attacks, Martin Ericla from Argentina escaped successfully and used the strong tail winds to build his lead to 6 minutes. Some riders in the chase group started to get nervous but the seasoned racers knew that once the hilly section with cross- and headwinds would begin, this lead would crumble quickly.

After the medium and long distance diversion at km 70, the racing hit its decisive phase in the steep Uruguayan hills. A 12% climb at Pueblo Eden burst the peloton and a lead group of five eventually formed. They soon caught up to Ericla who was spent from his solo effort and eventually dropped all the way back to the second group.

“Here in Uruguay, we’re used to doing circuit races with multiple small loops,” said Bonifacio after his win. “I loved racing on such a big, one loop course, including the early miles right through the heart of Punta. This was an experience on another level, very exciting!”

Meanwhile the women’s race was solidly in Uruguay’s hand: Laura Rossi took the win in 6:05:45h, taking half an hour out of seasoned GFNY racer Paula Fanti from Buenos Aires. Veronica Lienhard, also from BA, completed the podium.

For the age groupers in the peloton, GFNY Uruguay served as a qualifier for the racer corral at the GFNY Championship in NYC on May 15, 2016. The top 10% in each age group earned one of the coveted spots in the front of the 5000-rider peloton in NYC.

“Being part of a peloton of mostly South American athletes is a unique experience,” adds GFNY CEO Uli Fluhme who raced as well. “Their passion not just for life in general but also for cycling in particular is compelling. Plus, thanks to the incredible support of the local police forces, everyone was truly treated like a ‘Pro for a Day’ as the motto of GFNY states.”

Next stop on the GFNY World calendar is Bogota, where the second annual GFNY Colombia will be held on April 10. It’s the last GFNY before the Championship in New York on May 15.