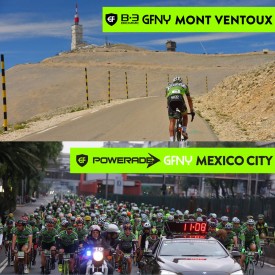 1300 racers took on Biemme GFNY Mont Ventoux, which finished on top of the legendary mountain. The 80mile / 130km race had a total elevation gain of 11,500ft / 3500m. Alexander Duncan from the UK won in 4:12:35, beating Bart van Damme from Belgium by a mere 43 seconds. Local Fabian Muzette rounded out the European podium. Based on previous race results, Duncan’s climb time up Ventoux is expected to be faster than 2/3 of the Tour de France peloton which will tackle the myth in a few weeks.

Amandine Martin from France won the women’s race in 5:04:59 beating compatriot Sandra Martin by over half an hour. Coraline Cambours rounded out the French podium in 5:39:23, just two minutes behind second place.

“GFNY Mont Ventoux has become an instant classic for climbing specialists and fans of the legendary climb,” says GFNY CEO Uli Fluhme. “It’s the only bike race open to amateurs that finishes on top of Mont Ventoux. While many people can climb Mont Ventoux, tackling the climb after 100km of racing over three cols is an incredibly difficult challenge that requires tenacity and smart pacing.”

The 78mile / 125km inaugural Powerade GFNY Mexico City set off in the heart of Mexico City on Avenida Reforma with a sold out field of 2700 riders. While the starting elevation was already at a whopping 7325ft / 2233m, the race finished just after the crest of the Ajusco pass at a lung-bursting altitude of 11,902ft / 3628m – a full 1000m / 3000ft above giants like the legendary Col du Galibier, often the highest point of the Tour de France.

“Starting a GFNY in the heart of one of the five largest cities in the world was an incredible experience ,” says GFNY President Lidia Fluhme. “It was actually the first time a mass participation bike race was held in Mexico City – and the other four big cities don’t have one yet. A huge thanks from GFNY to the government of Mexico City and in particular to Mexican Sports Minister Alfredo Castillo for supporting GFNY in such a big way.”

The race was dominated by Colombian power couple Camila Cortes and Gabriel Corredor. Their home city and location of GFNY Colombia, Bogota, is at a similar height and of almost identical climate, which meant they would not be disadvantaged like many riders coming from sea level were.

Cortes is now the indisputable Queen of GFNY, having won six races in total (three of which in NYC). She was defeated just once, when she suffered a mechanical in GFNY NYC 2014, where she finished 3rd. Her win in Mexico City was never in doubt. She crossed the line in 4:25:05, outperforming Mexican Gabriela Mijangos by 15 minutes (4:40:51). Olympian triathlete Fabiola Corona (Mexico) took third place in 4:44:55.

Corredor has a 2014 GFNY NYC title to his name as well as several podium finishes at GFNY NYC and GFNY Colombia. Known for his relentless attacks, he didn’t hold back as soon as the road kicked up. Immediately after the 5km neutralized phase, Corredor set off. The Mexicans Escamez, Meza, Tamayo and Huber initially followed but Corredor kept hitting them with his attacks until he finally was in the clear. He crested the first of three climbs with a 2-min lead – and never looked back.

Behind him, the four Mexicans tried to organize a chase but they neither worked well together nor seemed to have had the legs to match the Colombian. Corredor won the race after an 80km solo ride in 3:59:32, averaging an incredible 32.5km/h for this net uphill race in thin air. Jorge Escamez finished second at 4:08:38 and David Meza third in 4:11:42.

While the elite athletes were shooting for the overall and age group podiums, many riders competed to snatch a coveted racer corral spot for the GFNY World Championship in NYC on May 21, 2017. The top 10% in each age group earn one of the spots at the front of the 5000-rider peloton in NYC. The next chances to qualify are the inaugural GFNY Deutschlandon August 28 and the third annual GFNY Italia on September 18.

The 7th annual Campagnolo GFNY Championship New York will be held on May 21, 2017. The race features the world’s most international peloton with riders from over 90 countries. Athletes take on a challenging 100-mile route from NYC to Bear Mountain to Fort Lee to compete against each other, the clock and themselves in a personal endurance challenge.

At all GFNY events, riders have the chance to qualify for the elite racer corral at the GFNY Championship in NYC by placing in the top 10% of their age group.