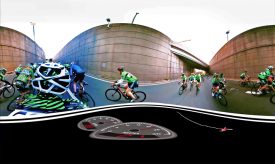 NEW YORK CITY, September 2, 2016 – GFNY has partnered with Sprocket Films and Car of Tomorrow to create a Virtual Reality (VR) film of the 2016 GFNY New York City Championship. For the first time, would-be riders can feel for themselves what it’s like to ride the course – an unprecedented, immersive video experience for a mass-participation sporting event.

The video will be exclusively released together with Campagnolo at Eurobike on September 3. It will be available for everyone to watch starting September 5 at gfny.com.

“VR is the buzzword on everyone’s lips these days, but until now we haven’t seen VR used in a mass-participation sporting event,” says Alex Bruskin, owner of Sprocket Films and producer of GFNY’s official videos.

“Put simply, VR allows the viewer to feel as if they are inside the video, and to experience it from every angle: up, down, front, side and back. The viewer is in charge. We realized this would be the perfect way to capture what it’s like to wait in the buzzing crowd at the starting line, to ride in a pack, to see who’s coming up alongside or behind you, even to take in the sky and the changing views in every direction.”

How is VR used?

GFNY’s VR is formatted so it can be watched on a smartphone (with Youtube app) or on a computer using the Google Chrome browser. As with any new technology, there are challenges and limitations, but the possibilities are also game changing.

“Many potential participants would love to get a sense of what riding GFNY is like before signing up for the race,” says GFNY CEO Uli Fluhme. “It’s impossible to fully capture the thrill in the air at the starting line, but VR has the ability to communicate some of that excitement.”

“A cycling event is the perfect venue for VR. When you ride a bike, especially in a race environment, you naturally look ahead, maybe back once in a while, and to the side from time to time. But basically, the audience can decide which direction to look in.”

There are four key challenges of making a VR video interesting for the viewer.

Firstly, often VR feels a little “remote” since VR cameras are by necessity wide-angled; this makes all but the closest subjects feel far away.

Secondly, the viewer doesn’t know where to look and can get disoriented pretty easily: is the action in front, behind you, or overhead?  It’s a totally new problem for the filmmaker, who is normally able to direct the viewer’s attention by framing the shot with clear intentions. With VR, the viewer herself has to choose where to look.

Bruskin adds: “A bike race, however, offers the perfect balance: you want to be able to look around, but you also know instinctively that your attention will always return to the direction you’re heading: you know to keep an eye on the road ahead.”

“In any clip where the viewer needs to pay attention to a specific action, there’s a risk that the audience will miss it entirely if they’re looking in the wrong direction at that moment.  So the test becomes directing viewers so they don’t miss out. Current techniques don’t do a great job with this. Filmmakers now mostly use clunky devices such as graphics (arrows and other indicators that literally point you where to look), sound design (for example, a loud noise in one spot designed to grab your attention), or actors who are forced to wave their arms at the camera. And by the time the view finally looks in the right direction, the action is already over. Fortunately in cycling, the road ahead is instinctively identified.”

Thirdly, there are challenges with the current camera technology. “The VR camera is actually an array of six separate cameras mounted together, all shooting in fixed directions – it looks a bit like a high-tech pineapple,” explains Bruskin.

“The footage from each camera is then “stitched” together by powerful computers that are capable of rendering the massive image files, ultimately creating one 360˚ video.  The camera array needs to be mounted on a stable platform, otherwise the images won’t synch together properly.  Also, since the array is on a tripod, you will have a “dead zone” directly under the cameras where the tripod sits.  Currently, the only way to cover that nadir point is by inserting a graphic image, or by doctoring the hole with extensive computer graphics.”

Lastly, if the viewer is fully immersed in a VR environment for too long (around 20 minutes or so) there can be significant issues with nausea, disorientation, etc.

“We kept the clips relatively short, so viewers can go back and rewatch the action in different directions if they want to,” adds Fluhme. “And keeping the clips short also avoids the risk of motion sickness.”

Camera stability was the biggest challenge. Mark Smith, GFNY’s veteran cameraman, who risks his life every year shooting the race action off the back of a motorcycle had the idea to shoot the VR. He designed a special rig for the VR cameras that was constructed from a Stedicam vest with a camera mount on its back. Smith ran numerous tests to balance the tradeoff between keeping the cameras stable and high enough so you weren’t just staring at the back of the rider’s head.

The project was taken on with the assistance of VR tech Chris Warner and experienced cyclist Mike Smedes, who was willing to ride parts of the course with an eight pound camera rig on his back, trying to keep as steady as possible, not interfere with the other racers, and simultaneously not crash.

“There were sections that we had to let go of because of synching problems with the cameras,” explains Bruskin. “But we got some great coverage of the starting line, the climb near the end of the race up Dyckman Hill, the finish line, and part of the awards ceremony.”

“And as for the “nadir point,” or blind spot where the tripod sits, we used a graphic from Mike’s cyclometer to fill it. This gives a sense of his cadence, speed, and location on the course.”

Fluhme concludes: “Car of Tomorrow was willing to devote many, many hours of labor, computing time, and of course provide the equipment to put the VR clips together. We’re very grateful they did.”

“I think VR is poised to become the way to go for mass-participation sporting events like GFNY. The technology is still improving, but we’re thrilled and proud to be on the cutting edge and bring new ways of experiencing GFNY to our worldwide audience.”