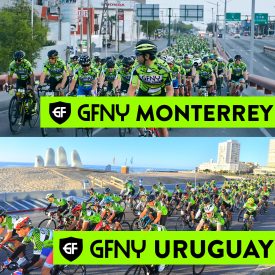 NEW YORK CITY, March 13, 2019 – Two races on the same day in two countries with a huge passion for cycling make for an exciting weekend on the GFNY World circuit this Sunday 17 March.

The second edition of GFNY Monterrey will host 1300 riders from 20 nations. Mexico’s cycling elite and enthusiasts from around the world will line up for a grand festival start in the center of downtown Monterrey at Parque Fundidora.

The long competitive distance will challenge riders over 149km and 1711m of climbing. The route travels on an undulating route before finishing on top of legendary Chipinque Mountain after 7km of climbing. The exciting route combines European style switchbacks with spectacular views of the Monterrey skyline.

The 105km/708m medium non-competitive route starts with the long distance before splitting at the start of Chipinque climb.

At both GFNY Uruguay and GFNY Monterrey, 10% of finishers in each age group in the long route will qualify for the Racer Corral at the 2019 Campagnolo GFNY World Championship in NYC on May 19.

Punta del Este, the San Tropez of South America hosts GFNY Uruguay. 500 riders from 23 nations will start out from Punta Del Este, through the heart of the town and along the beautiful coastal road before heading inland. Away from coastal roads riders will pass scenic ranches and colorful villages before returning to the finish line at Punta Del Este’s premier hotel, Enjoy! Punta del Este.

The long competitive distance of 171km has 1789m of climbing and nine rolling climbs in total on a maximum gradient of 12%. El Chorro is the first climb early in the race at km 21. At km 72, Zanja del Tigra is a 3.5k climb and the highest peak, indicating the halfway point, before a rolling descent back into Punta del Este.