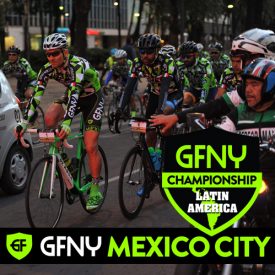 NEW YORK CITY, March 28, 2017 – The first-ever GFNY Regional Championship took place last Sunday, March 26 at the GFNY Latin America Championship in Mexico City. The race started in the heart of the Latin metropolis and finished in the mountains above the city.

Riders from all across Latin America and well beyond competed for the coveted crown to be GFNY Queen and King of Latin America. It was a championship-worthy course: 130km with 2,319m of climbing and a mountaintop finish at 3080m.

In the women’s race, 8-time GFNY Champion Camila Cortes (Colombia) was again unbeatable. After winning GFNY Colombia four weeks ago, she added a 9th GFNY title to her incredible palmares by finishing first in 4:15:03. Mexicans Gabriela Diaz and Ximena Buenfil finished 11 and 13 minutes back for second and third.

“Winning never gets old but neither does it get easier,” said Cortes. “I made a lot of sacrifices to get to this level. And I’m ready to defend my GFNY World Championship crown in May.”

In the men’s race, a group of five riders separated itself, including defending champ Gabriel Corredor (Colombia) and GFNY Cozumel champion Flavio De Luna (Mexico). Despite the finish line being well above 3000m with a 10km final ascent, the race came down to a sprint between De Luna and compatriot Eduardo Corte. De Luna took the win in 3:51:59. Luis Naranjo rounded out the podium, leaving Corredor with fourth place.

“It was a true championship course for a cycling marathon race series like GFNY,” said GFNY CEO Uli Fluhme who did the race as well. “There was plenty of climbing to do but it wasn’t a pure climber’s race. The GFNY Latin America Champion, De Luna, is a pro and a complete racer, given that he also won the pancake flat GFNY Cozumel last November. I’m curious to see what he can do at the GFNY World Champs in NYC against the Colombian and New York elite racers.”

While just a few riders were in the hunt for the overall win, there were many aiming to qualify for a racer corral spot at the Campagnolo GFNY World Championship in NYC on May 21, 2017. While GFNY World events grant these exclusive slots to all finishers in the top 10% of their category, the more competitive Regional Championships extend this to 20%.

Next up on the GFNY Calendar is the inaugural GFNY Malaysia on April 24 held in Ipoh. It’s the last race and chance for riders to qualify for the racer corral at the Campagnolo GFNY World Championship in NYC on May 21, 2017.