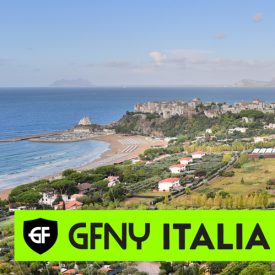 NEW YORK CITY, September 14, 2016 – The third annual GFNY Italia is again set up to be the most competitive of all GFNYs in the circuit. Terracina in the Lazio province is the host town of this authentic Italian granfondo with the spectacular sea-hills-sea course.

“GFNY Italia was our first race outside NYC,” says GFNY CEO Uli Fluhme. “I have raced granfondos all over Italy since the mid-90s and always enjoyed the extreme competitiveness paired with top level skills of the Italian granfondisti. Racing in Italy is something every bike racer should experience at least once in their lives. There’s nothing quite like it.”

GFNY Italia is held on a 125km / 78mi course with 1,738m / 5,702ft of climbing. It’s the only bike race that includes the spectacular Sperlonga climb, a curvy road that hugs the edge of several hills inching its way to the top. The road offers broad views of the Mediterranean Sea and phenomenal sights of the historic town of Sperlonga.