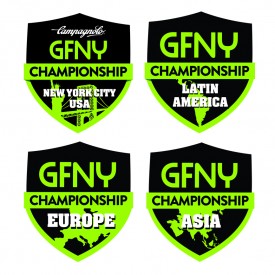 Three existing events were selected as the regional championships: GFNY Mexico City, GFNY Mont Ventoux and GFNY Indonesia, for their 2017 and 2018 editions.

“GFNY is growing tremendously on a global scale,” says GFNY CEO and co-founder, Uli Fluhme. “GFNYs marquee event in NYC will reach its capacity of 6000 riders 2017. Adding regional championships is a logical step in the growth of the series. “

Lidia Fluhme, GFNY’s President and co-founder, adds, “GFNY races are unique because they are open to amateurs and pros alike. Similar to running or triathlon, where all athletes toe the same start line together and compete on a traffic-moderated course with start-to-finish chip timing, GFNY offers the same challenge for cyclists. Regional championships will add another competitive element and simultaneously offer more qualifying places to the GFNY World Championship NYC.”

Overall winners at the regional championships will be invited to the GFNY World Championship race in NYC. Furthermore, all championship races will offer the top 20% (instead of 10%) of riders in all age groups a racer corral spot at the NYC race.

With a start in the heart of Mexico City at Avenida Reforma and finish at the breathtaking height of 11,900 feet / 3630m, GFNY Mexico City has quickly become not only the stand out race in Mexico but also a must-do event in all of Latin America. The late March race date means it’s at the end of the southern hemisphere summer, so all of Latin America will be ready to tackle the challenging course.

GFNY Mont Ventoux finishes atop of the legendary namesake mountain. However, the real challenge is not the summit to the top, but rather the demanding race course that sees riders tackle three cols before their ascent up Mont Ventoux even begins. The GFNY Mont Ventoux race course is difficult and favors experienced racers who can manage their effort and variable conditions.

“Finishing a bike race on top of Mont Ventoux used to be an experience exclusively reserved for a few professional cyclists every few years, until we changed that,” says GFNY Mont Ventoux co-founder Nicolas Garcera. “Our race course is tough and beautiful. It’s the perfect place for the GFNY Europe Championship.”

GFNY Indonesia is held on Lombok, the exotic and tranquil neighbor island of Bali. The highlights of the 170km-long course is the climb up to Pusuk Pass with the monkey forest as well as the last 25km along the stunning northwest coast of Lombok overlooking pristine, deep blue waters of the Lombok Strait.

“The GFNY riders will race hard under tropical conditions and will face several steep climbs,” says GFNY Indonesia co-founder Axel Moeller. “But our host town Senggigi, the oldest and most famous resort area of Lombok, is also the perfect place to relax. Senggigi boasts a series of white sand beaches and safe swimming areas. It’s the ideal location for the GFNY Asia Championship.”

The 7th annual Campagnolo GFNY Championship New York will be held on May 21, 2017. The race features the world’s most international peloton with riders from over 90 countries. Athletes take on a challenging 100-mile route from NYC to Bear Mountain to Fort Lee to compete against each other, the clock and themselves in a personal endurance challenge.

At all GFNY events, riders have the chance to qualify for the elite racer corral at the GFNY World Championship in NYC by placing in the top 10% of their age group at GFNY races and in the top 20% at all GFNY championship races.