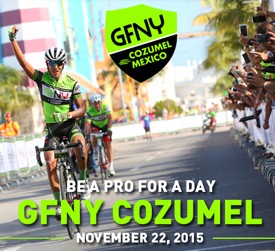 Before the race, GFNY Cozumel held a 2-day pre-race expo with 30 vendors and a Parade of Nations and Teams to celebrate the riders who came from near and far to compete in the event. The island of Cozumel provided a festive, tropical and safe setting for the entire peloton as well as family and friends.

On Sunday morning, the 160km-long race started out fast from the gun with speeds hitting 60km/h (38 mph). None of the immediate and relentless attacks lasted long. The lead peloton consisted of 50 riders, including all race favorites.

It took 80km for a group of five to successfully get away – and they were all Mexican: professional racer Luis Lemos, Carlos Hernandez Santana, Reyes Mesa, Andres Rivero and Johnny Valencia. With 20km to go, Lemos and Santana got away from the other three. Both worked together until 5km to go when Lemos started attacking Santana. With 500m to, Lemos finally succeeded and took the race. His time was 3:42:43, an average of 44km/h (27.3 mph).

Double GFNY NYC champ (2013 and 2015) Camila Cortes from Colombia was facing three strong Mexican competitors: Olympian Fabiola Corona, Alphanie Midelet and Victoria Madrigal. The four were watching each other closely during the whole race. Despite a lot of attacks throughout the 160km, the race came down to the last two kilometers through town. Cortes proved why she is the double GFNY NYC and GFNY Colombia champion – she distanced herself from her competitors and took the win in 3:45:12 – an average speed of 42.7km/h (26.5 mph)!

For the age groupers in the peloton, GFNY Cozumel served as a qualifier for the racer corral at the GFNY Championship in NYC on May 15, 2016. The top 10% in each age group earned one of the coveted spots in the front of the 5000-rider peloton in NYC.

Next stop on the GFNY World calendar is San Luis with the first edition of GFNY Argentina on December 6, 2015. Riders will tackle a more challenging course with a mountain finish in Argentina’s hotbed of cycling.

GFNY WORLD now features events in Germany, Italy, Indonesia, Mexico-Cozumel, Argentina, Colombia, Mexico City and at Mont Ventoux/France. Riders there have a chance to qualify for the elite racer corral at the GFNY Championship in NYC by placing in the top 10% of their age group.