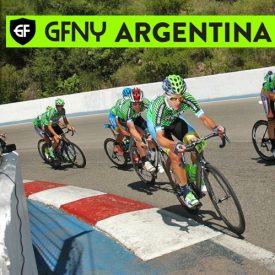 A lead group of 20 formed after only 10k of racing when the racers from the local pro team put on the pressure in the cross winds. Five riders made a break with 40k to go and it was up to Mirador del Potrero to make the final decision. Enzo Josue Moyano took the win in 3:04:10, averaging 39km/h for 120km with 1,750m of climbing. Carlos Velazquez from San Luis Somos Todos pro team took second, Alfredo Lucero third.

“We decided to take advantage of the trade winds and put the pressure on the peloton early to make a pre-selection,” says Moyano. “I had good legs today so I tried to break our little group already on the Potrero de los Funes race track. It didn’t work immediately but thankfully I was able to drop one after the other on that last tough climb up Mirador. It was fantastic to win up there. Let’s see what I can do at the GFNY World Championship in NYC in May.”

Fiorella Malaspina dominated the women’s race, maintaining her lead from start to finish. She was the only woman who made the cut into the second group during the hectic opening kilometers in the cross winds. Her winning time was 3:19:07, beating Alicia Reynoso Pueyo by 10 minutes. Aldana Cetra rounded out the podium less than a minute back.

While only few riders were in the hunt for the overall win, there were many aiming to finish among the top 10% of finishers in their category to qualify for a racer corral spot at the GFNY World Championship in NYC on May 21, 2017.

Safe Cycling Around The World Is Goal Of New Guide