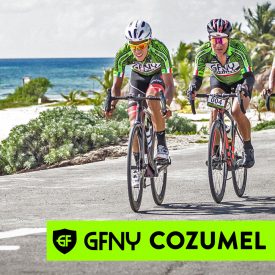 Clear blue skies and picture-perfect conditions made GFNY Cozumel the hottest on record in the event’s five-year history. 50 countries were represented with several teams on the island to help their lead rider take the victory. The international depth of field resulted in the fastest race on record.

From the gun the race was full speed with riders moving at over 60kph. There was an immediate breakaway from a solo Cozumel rider testing the pack. He was caught within five minutes by a five-person breakaway consisting of pro cycling legend Raul Alcala (Mexico), Jarlinson Pantano (Team Trek Segafredo) and other strong Colombian riders. The five held strong until the ‘Mazda King of the Wind’ section where they were caught by a large peloton containing last year’s winner Flavio de Luna.

In the last quarter of the race, a group of fifteen made a successful break from the peloton. The riders, including Alcala, Pantano, 2017 GFNY NYC champ Ricardo Piccheta, Flavio de Luna, Mario Zamora and Luis Villalobos were all dangerous and capable of taking the win.

As they headed back into town, de Luna attempted a solo attack for 3km before he was caught and the remaining riders with fresher legs counterattacked with speeds exceeding 55kph.

With 1km to go to the finish Mario Zamora went for one last break and took it all the way to the finish to take the title in a time of 3:49:05. Second place went to Ignacio de Jesus Prado Jurez in 3:49:15 and Luis Ricardo Villalobos Hernandez completed the podium for a Mexican one, two, three.

In the women’s race it was a tight three-way battle for the win with fractions of a second separating the top three. Mexican Ana Teresa Casa Bonilla emerged with the victory in 3:56:40. Maria Ximena Calzada Leon took second in 3:56:46 and Frida Mancilla Cruz rounded out the podium in 3:56:56.

Next up is GFNY Chile on November 25.