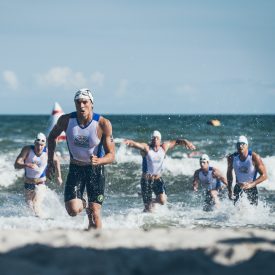 Cape May, NJ (June 11, 2019) – DelMoSports and Red Bull announce the return of Red Bull Surf + Rescue, the premiere lifeguard competition on the East Coast of the United States. Scheduled for July 16th on Steel Pier beach in Atlantic City, NJ, Red Bull Surf + Rescue brings together 40 teams of elite ocean rescuers in an elimination format incorporating classic disciplines of swimming, prone paddling, and rowing with a unique Red Bull Rescue Relay to determine the best beach patrol on the East Coast. This year’s championship will be an intense competition among New Jersey beach patrols with special invitations to teams from outside New Jersey to take on their peers.

As part of the Red Bull-DelMoSports partnership, Red Bull will also become the Official Energy Drink of DelMoSports and its portfolio of prestigious multisport events in Southern New Jersey and Philadelphia.  Those events include the venerable Escape the Cape Triathlon in N. Cape May, NJ; the Women’s Philadelphia Triathlon; the Atlantic City Triathlon; Tri the Wildwoods; and IRONMAN 70.3 Atlantic City.

“We’re excited to continue our partnership with Red Bull and expand their involvement with DelMoSports,” commented Stephen Del Monte, CEO of DelMoSports, LLC.  “We’ve been working with Red Bull on Red Bull Surf + Rescue since 2015, helping grow it into one of the most exciting summer events in Atlantic City.  Watching the talent and skills of these elite lifesavers is tons of fun!  And adding Red Bull to our family of DelMoSports partners is a great honor. Providing the best to our athletes is always our priority and no doubt Red Bull enhances their experience through great products and creative activation.”

DelMoSports, LLC is a boutique race company founded in 2004, specializing in elite destination events along the southern New Jersey shore and Delaware.  Their unique and award-winning events include IRONMAN 70.3 Atlantic City, the Women’s Philadelphia Triathlon, the MudHen Race Series, Red Bull Surf & Rescue, the Atlantic City Triathlon, Tri the Wildwoods Triathlon, and Escape the Cape Triathlon and Open Water Classic, which was voted the Best Triathlon in the Mid-Atlantic and Northeast Regions by Competitor. Known for high quality, athlete-centered productions with an emphasis on community involvement, DelMoSports events provide challenging courses, spectacular scenery and amazing vacation opportunities for athletes and their families. www.delmosports.com

View all Releases by DelMoSports

Jake Fedorowski Hated Registering for Races Outside Their Identity. So They Decided to Speak Up