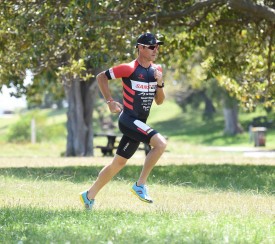 CARINGBAH, AUSTRALIA—March 21, 2016—Craig “Crowie” Alexander and Newton Running announced a lifetime partnership today, making a strong alliance between one of the greatest triathletes in history with a performance running brand that is the favorite of triathletes worldwide.

While Craig has stepped back from racing full distance Ironman races, he continues to regularly win at the 70.3 distance demonstrating, that at nearly 43 years young, age is simply a number.   In addition, Craig created his own unique triathlon coaching brand Sansego (meaning without ego), a label fitting for the man known for his professionalism on and off the race course.  With Sansego, Craig will continue to bring his expertise into the world of triathlon to beginner and elite triathletes all over the world.  And with its commitment to efficient running mechanics and innovation, Newton Running will remain a significant component of Craig’s philosophy.

Craig has been sponsored by Newton Running since the company’s debut in 2007. “Newton shoes have been an essential part of my training and racing toolkit for more than eight years. The technology rewards and encourages efficient running, which has been a key to my racing success. I can’t imagine running in anything but Newtons and I look forward to our continued partnership,” said Craig Alexander.

“Craig has been part of the Newton family for more than eight years. We are thrilled to have been part of his significant achievements in the world of endurance sport, and we are looking forward to a continued partnership as Craig brings his passion, knowledge and sense of community to runners and triathletes all around the world,” said Yo Schmidt, Director of Athletes & Events at Newton Running.

A favorite shoe of elite runners and triathletes worldwide, Newton Running launched in 2007 with the goal of helping to make every stride better.  Newton Running’s patented Action/Reaction™ Technology creates a responsive, trampoline-like cushioning system that provides quicker bounce-back and loses less energy than a traditional foam-core running shoe. The level platform aligns with the human body and puts a runner in a position to run most naturally and efficiently. As a certified B Corporation, Newton Running is committed to and recognized for a higher level of accountability, sustainability and philanthropy. Newton Running shoes are sold at Specialty Running Stores around the world, as well as select online distribution partners and www.NewtonRunning.com.

View all Releases by professionaltriathlon.com