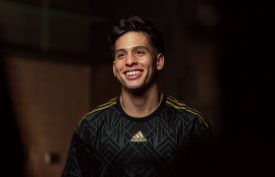 “We first heard about how BOA Endure was helping Duke basketball players who were having problems with cramps due to sodium loss in games,” said Torres. “We all know how painful a cramp can be, and if you’re cramping during a match where every moment matters, then what you put into your body also matters. This is why I trust Endure to make the 90th minute feel like the first minute.”

Torres, a dual national who was born in California, is known for being the youngest player in MLS history to start in a playoff game, a milestone he accomplished in 2020 at the age of 16. In addition to playing for LAFC, it was announced today that Torres will also play for the Mexican U-20 National Team.

“We are delighted that Christian has chosen to endorse BOA Endure,” said Jon Pritchett, BOA Nutrition President & CEO. “Like all ambassadors of BOA products, we love that Christian has real world experience using our product in the most grueling circumstances. Soccer players cover a lot of ground in a match, often running at full speed over a sustained period and quickly burning sodium, so it’s a perfect sport for the benefits of Endure.”

BOA Nutrition, Inc. is a sports nutrition and wellness company based in North Carolina. They develop unique products with novel ways to rapidly deliver essential nutrients so athletes of all ages and skill levels can optimize their performance. BOA’s objective is to provide athletes with fast-acting, concentrated, great-tasting and convenient products to use no matter where, when, or what the sport. The company’s technology, and many other innovations from BOA, are protected by 18 provisional patents and other proprietary trade secrets. Follow BOA Nutrition, Inc. on Facebook, Instagram, LinkedIn and Twitter.