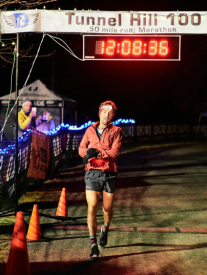 Bitter’s time was 36 minutes faster than the American 100-mile trail record set by fellow Altra Elite Ian Sharman at the 2011 Rocky Raccoon 100 Mile. Bitter’s 12:08:36 is 28 minutes behind his own American record for 100 miles on the track, and the fourth best time on the North American all-time chart across all running surfaces.

The Altra shoes Bitter wore for his record-setting speed were tester prototypes of the Altra Vanish-XC. This cross country racer is light—just 5.5 ounces—with a low, lean 15 mm stack height. The open mesh upper doesn’t have traditional lace eyelets, which allows the runner to create a variety of lacing patterns customized to your individual needs or foot shape. Rubber “spikes” provide maximum traction while keeping the shoe legal for non-metal spike races.

Like all Altra shoes, the Vanish-XC features Zero Drop™ balanced, level cushioning and a FootShape™ toe box for maximum toe-off power and natural stability with each foot strike. The shoe will be released in May 2019 for $79.

Bitter’s next event will be the Desert Solstice 24 Hour and 100 Mile Track Invitational on December 8.  Previously, at the 2015 Desert Solstice, Bitter set the 100-mile American record with 11:47:21, which still stands. This year, he’ll attempt a new record for “most miles in 24 hours” with hopes of beating the current world record of 188 miles.

Stay updated on Zach Bitter’s accomplishments and on all of Altra’s Elite and Red Team athletes by following the Team Altra Facebook page.

View all Releases by Colleen