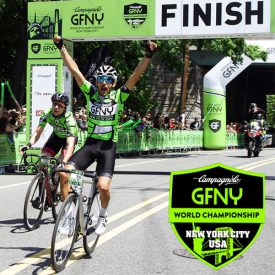 GFNY World events Argentina, Colombia, Cozumel-Mexico, France, Germany, Indonesia, Italy, Mexico City, Malaysia and Uruguay were represented. Later this year and in 2018 more World events join the GFNY calendar. Chile, Bali, Costa Rica, Monterrey and Jerusalem will give riders a chance to Be A Pro For A Day.

Descending Bear Mountain, De Luna carved a lead of 20 seconds on Ash and almost 3 minutes on the chase pack of 15 riders that included defending champion Mike Margarite of New York. Margarite’s group then split into two with a group of four making a firm attack on the leaders.

The four-man chase group contained Daniele Terzi (ITA), Ricardo Pichetta (ITA), Chase Goldstein (Team Weather Channel, CA, USA) and Victor Gras (Team Rockstar, NY, USA). Working together, they caught up to and dropped Ash and then caught De Luna at mile 70. On the climb up to Route 9W, DeLuna paid for his early efforts and was dropped.

As the race returned to River Road for the final 10 miles, it was down to four – Italy versus the US. Meanwhile the chase group was 90 seconds back with 2016 defending Champion Margarite pulling. For over 40 miles no one had seen nor heard from Margarite. It was a heroic effort but too late.

At first, no one wanted to work, so the riders warily watched to see who would make the first move.  Victor Gras launched the first attack up Dyckman Hill. He was followed by Goldstein and Pichetta while Terzi was dropped. Soon after, also Goldstein was in trouble. As the final mile approached on Hudson Terrace, Pichetta and Gras looked at each other, which allowed Goldstein to claw his way back to the two leaders.

It was the most dramatic finish in GFNY history. Gritting his teeth, Ricardo Pichetta proved the strongest, and in a photo finish, he won in the time of 4:28:47. Victor Gras beat Chase Goldstein for a close second.

Defending Champion, Colombia’s Camila Cortes once again showed what she’s made of to take a fourth title bringing her GFNY World victories to ten. She won in a commanding fashion, leading from start to finish, in a time of 4:45:30 but Cortes’ 20 minute winning gap from 2016 over Marcella Toldi of Brazil was reduced to just over two minutes. A stronger looking Toldi took second in 4:47:32 giving her a huge boost in confidence and a sign that there finally could be some vulnerability and a way to beat Cortes. Brazilian Maria Camila Giannella was third in 4:56:08.

For the second year, GFNY also controlled bikes for motors at the start and finish. No motors were found.

At all GFNY events, riders have the chance to qualify for the elite racer corral at the GFNY World Championship in NYC by placing in the top 10% (20% at world and regional championships) of their age group.