5,000 riders from 93 countries competed for the GFNY crown and to challenge themselves 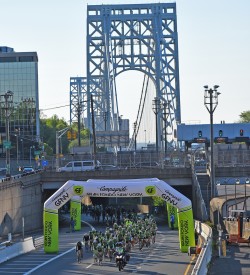 NEW YORK CITY, May 17, 2016 – The sixth annual international Campagnolo GFNY Championship NYC was held Sunday, May 15, 2016. The world’s most international cycling event brought riders from 93 countries to the world’s capital. It was the culmination of GFNY World races around the globe, now held in Argentina, Colombia, Cozumel-Mexico, France, Germany, Indonesia, Italy, Mexico City and Uruguay. Further races will be added in 2017.

Local racer Gavi Epstein (Lupus Racing) attacked in the opening miles and established a lead of up to 3 minutes on a peloton that at times was as big as 150 riders. By the time the race hit Haverstraw at mile 35, Mike Margarite (NYC, Team Weather Channel) and Enrique Quinones from Colombia went on the pursuit. Margarita caught and dropped Epstein during the assault of Bear Mountain while Quinones fell back.

Behind, the big group fell apart due to several attacks up Bear. A chase group formed, including Colombians Corredor, Montana, Trujillo, Hamon as well as Pichetta (ITA) and Cruz (DOM). Trujillo did most of the work because the other Colombians thought they had a rider of their team – Quinones – up the road. As a result more riders caught up from behind and the group swelled to 13 by mile 70.

New Yorker Allan Rego (Lupus Racing) and Pichetta attacked but it was too late: Margarite had a lead of 6 minutes established and won the men’s race in 4:30:25. The chase group was left to battle for the remaining podium spots. Rego took second in 4:36:51, Cruz completed the full NYC podium sweep in 4:36:58, cracking a two-year Colombian dominance and keeping the crown in town for the first time ever. The defeated Colombians took it in stride and already look forward for a revenge in 2017.

The story of the women’s race was one of the total domination of defending champion Camila Cortes from Bogota, Colombia. Despite fracturing her elbow three weeks ago in a crash caused by a moto during training, she took the lead from the gun and never looked back. Cortes finished in 4:51:21, beating second place Marcella Toldi from Brasil by over 20 minutes. Canadian Heather Low was third in 5:19:06.

GFNY hired the United States Anti-Doping Agency (USADA) to administer in- and out of competition doping controls to ensure a fair competition. In 2012, GFNY was the first amateur event to hold out of competition controls (=not on race day). These controls are critical to serve the surprise element.For the second year, GFNY also controlled bikes for motors at the start and finish. No motors were found.

The 6th annual Campagnolo GFNY Championship New York was held on May 15, 2016. The race featured the world’s most international peloton with riders from 86 countries. Athletes take on a challenging 100-mile route from NYC to Bear Mountain to Fort Lee to compete against each other, the clock and themselves in a personal endurance challenge.

The 50-mile GFNY BEAR on the same day was a non-competitive ride from NYC to Bear Mountain.