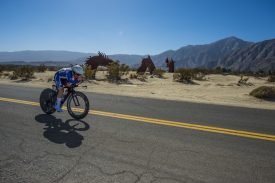 Champions Are Crowned And Records Are Broken In The Desert

This past weekend was the ultimate display of ultra-bicycle racing.  The sold out race field consisting of 200+ racers from 16 countries, 25+ States and 5 continents traveled to Borrego Springs, California for the 8th annual  WTTC.  With a balanced field of veteran and rookie racers the competition was fast and furious down to the last minute. The near perfect weather offered the opportunity for records to be broken, and they were.

The 24-hour men’s solo race was dominated by Christoph Strasser (AUT), the current WTTC and Race Across America record holder. He came with the goal of breaking 559 miles (900 km) and he did just that. All of the observers erupted with cheers as he surpassed his goal and completed the race with an overall win and 567.6 miles (913 km). Marko Baloh (SLO) finished second with 514.8 miles. Baloh has exceeded the 500 mile mark, four times at the WTTC, the only racer to that. Mark Gibson (USA/UK) finished third with 477.6 miles. Jakob Olsen (DEN) was a close fourth with 474 miles. Olsen is preparing for his first solo RAAM in 2019.

Breaking the 400-mile in 24-hours barrier for women is a rare occurrence. This year the entire overall podium did just that and all three also broke the previous record. Relative newcomer to ultra-racing, Jennifer Orr (USA) won the overall race with 456 miles. Another new face to ultra-racing, Meaghan Hackinen (CAN) finished second also with a slightly slower 456 miles. Previous record holder, and 6-time RAAM winner, Seana Hogan (USA) rounded out the top three with 433.2 miles. The stunning performance by all three racers was incredible to watch throughout the 24-hours of racing.

Only 13 miles separated the top three women in the 12-hour race. Taking the top podium spot was Monica Storhaug (NOR) with 253.2 miles. Second overall was Janie Hayes (USA) with 243.6 miles. Standing on the third step overall was Christie Tracey (USA), last year’s defending champion, with 240 miles. Both Hayes and Tracy were returning to racing after serious injuries, broken collar bone and broken hip respectively, making their performance even more extraordinary.

Felicity ‘Flick’ Joyce (AUS), the coach and leader of Team Flick, stood on the top of the 6-hour women’s podium. Joyce completed 127.2 miles and fell just a few minutes short of setting a new overall record, but captured the age group record. A remarkable feat considering, like Hayes and Tracy, she is recovering from an accident earlier in the year and WTTC was her return to racing.  Second place was clinched by Donna Phelan (USA), for the third time, with 122.4 miles. Rounding out the top three was Christina Bonnington (USA) with 118.8 miles.

The near perfect weather played a huge part in a lot of new records being set and old ones broken this year. Some of the notable performances in the 24-hour race were Herve Talabardon (FRA) with 397.2 miles in the 70+ solo division and at the opposite end of the age spectrum, William Naviaux (USA) in the under 20 category with 270 miles. Nancy Russell also set a record for the 60-69 age category with 310.8 miles. In addition two teams also set new benchmarks. In Our Prime (USA) set a new record for 2-person, female, 50-59 team with 451.2 miles and the Love Sweat & Gears (USA) rookie team set a new record for the 2-person, mixed 30-39 team with 433.2 miles.

The racers all set impressive standards for following years. The excitement and quality of racing was unparalleled!  The 2019 race dates will be announced soon along with the opening of registration. The race is expected to sell out quickly once again. Stay tuned for more information soon!