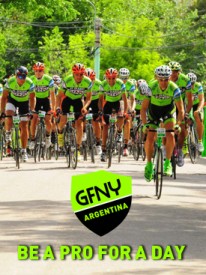 The race started out fast from the gun. Under the pressure of the San Luis Somos Todos Continental Team, the lead peloton of 50 riders tackled the initial undulating 70km at an average of 44.2km/h (27.5mph).

The second half of the race was dominated first by strong headwinds then by tailwinds. 18-year old Cristian Bertola of San Luis Somos Todos attacked into the wind with 35km to go. He used the tailwind and his team support to his advantage and reached the bottom of the climb with enough buffer to cross the hill-top finish line first. Mirador del Potrero is the region’s legendary climb with its 5.7km and altitude of 1270m at the top. Bertola won in 3:54:51, ahead of Ale Oviedo from Cordoba, Argentina (3:55:34). Colombian Jhoann Robayo finished third in 3:55:39. Jhoann is a regular on the GFNY World circuit, having played major roles at both the GFNY Championship in NYC and GFNY Colombia.

“Winning GFNY is a great confidence booster for the Pro Tour race Tour de San Luis in January,” said Bertola. “Being able to compete on the same roads and test Mirador del Potrero under racing conditions was fantastic.”

For the age groupers in the peloton, GFNY Argentina served as a qualifier for the racer corral at the GFNY Championship in NYC on May 15, 2016. The top 10% in each age group earned one of the coveted spots in the front of the 5000-rider peloton in NYC.

“I got to race GFNY Argentina myself,” adds GFNY CEO Uli Fluhme. “Having had an army of police officers fully close all roads for us was a very special treat. Everyone was truly treated like a ‘Pro for a Day’ as it is the motto of GFNY.”

Next stop on the GFNY World calendar is Punta del Este, South America’s Saint Tropez, with the first edition of GFNY Uruguay on March 6, 2016. It will be the fourth GFNY location in Latin America.