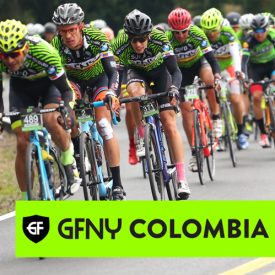 NEW YORK CITY, February 28, 2017 – 1700 starters tackled the 3rd annual international GFNY Colombia cycling race, the world’s highest all-comers cycling marathon, finishing at 3365m. It opened the 2017 GFNY World season, which consists of 14 races around the globe. The event sold out all 1800 slots one month before the race.

Held just 30 min. outside the country’s capital of Bogota, GFNY Colombia once again had all kinds of weather conditions in store for the riders. It was windy and sunny at times but also cold and rainy on top of the 3365m-high La Cuchilla mountain, where the race’s long route finished. Nonetheless, 1378 riders officially finished the challenging course, making it the largest Colombian cycling race ever.

In the women’s race, 7-time GFNY Champion Camila Cortes was again unbeatable. After finishing fourth in the national time trial championship two days prior, she added an 8th GFNY title to her incredible palmares. Cortes finished in 3:26:06, beating Lilibet Chacon by 5 minutes with Lorena Vargas another 8 minutes back in third place (all Colombia).

In the men’s race, all contenders stayed together until the bottom of the decisive climb up to La Cuchilla. Franklyn Betancourt showed up first on top and won in 3:11:27, defeating David Molina by three minutes. Antonio Donado followed closely in third while multiple GFNY champ Gabriel Corredor had to be content with finishing fourth (all Colombia).

Next up on the GFNY Calendar are the GFNY Italia Stage Race March 17-19 and GFNY Uruguay March 19.

The Italian event will be GFNYs first stage race, featuring a spectacular uphill time trial, a fast 60km road race stage with a climb to the finish and the classic 130km Gran Fondo with 2087m of climbing.