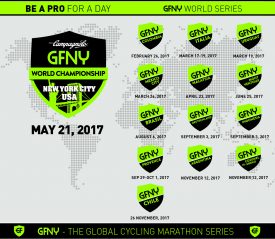 Riders from over 100 countries to compete around the world

NEW YORK CITY, November 22, 2017 – GFNY World, the global cycling marathon brand, continues expanding its portfolio of events in 2017. A total of 14 races will be held, including the Campagnolo GFNY World Championship in NYC and the regional championships Asia, Europe and Latin America. All the GFNY World events offer participants the established, trusted GFNY experience complemented with each location’s local flair.

At each GFNY event, riders enjoy

GFNY World races offer a consistent, high-quality rider and family experience across all events. Riders get to BE A PRO FOR A DAY on challenging, scenic courses with a professional level of support.

Every rider receives the iconic, official, neon green GFNY race jersey, which has become a sought-after badge of honor.

The original GFNY NYC race serves as the World Championship of the series, and each GFNY World race gives riders the chance to qualify for the elite racer corral start in NYC.

The 2017 GFNY World series consists of 14 events in 2017, including three new one-day races and two new three-day stage races. Also new: three regional championships in Latin America, Europe and Asia, where the overall winners receive a fully paid trip to the World Championship in NYC and the top 20% of each age group qualifies for the World Championship racer corral.

The year kicks off with GFNY Colombia, just outside Bogotá, on February 26 and will challenge riders with a climb reaching 11,031 feet (3362m). The race is held during the same week as Colombia’s Road Cycling National Championships, also held in Bogotá.

March 17-19, GFNY Italia will be GFNY’s first stage race consisting of an uphill time trial, a short, fast stage and a granfondo. Situated just 90 minutes south of Rome in the coastal town of Terracina, GFNY Italia delivers some of the most beautiful race courses in Italian granfondo cycling.

The first-ever GFNY Regional Championship takes place in Mexico City with the GFNY Latin America Championship on March 26. The race starts in the heart of the Latin metropolis and finishes in the mountains above the city. World record: none of the three larger metropolis than Mexico City has a mass participation bike race.

The Campagnolo GFNY World Championship NYC will be held on May 21. 5000 riders from over 90 countries are competing for the crown on a challenging 160km course with over 2500m of climbing. Riders who finished in the top 10% of their age group at previous GFNY events, receive a start spot in the racer corral at the front. Colombian Camila Cortes and New Yorker Mike Margarite are set to defend their 2016 titles.

On June 25, riders compete at the inaugural GFNY Europe Championship held at the third annual GFNY Mont Ventoux. The course is not for the faint-hearted and arguably the hardest of the three regional Championships: racers tackle 100km and three cols already before the ultimate assault on Mont Ventoux.

The long-awaited, inaugural GFNY Brasil offers a challenging course with over 3300m of climbing on August 6, just two hours from Rio de Janeiro.

GFNY Indonesia is the first GFNY Asia Championship, held on the exotic island of Lombok on September 3. Riders will test their mettle on climbs of up to 25% steep in the hottest and most humid conditions of the GFNY circuit.

GFNY Deutschland, also on September 3, is a chance for riders to enjoy smooth, fully closed-to-traffic roads. While Germans curiously enjoy alcohol-free beer after their races, GFNY also offers the traditional kind of beer to complement post-race sausage and fries.

GFNY Provence is GFNY’s second three-day stage race, and will be held on September 29 – October 1. Riders will tackle Mont Ventoux on the first day and enjoy two more breath-taking stages over cols and through charming, historic, Provençal villages.

The extremely successful GFNY Cozumel returns for the fourth time on November 12. With its sandy beaches and tropical weather, the event is a cycling marathon in paradise.

On the same day, GFNY Argentina is also held on fully closed-to-traffic roads around San Luis, South America’s hub for bike racing. Local police showcase in perfection how to close and secure roads for cyclists in beautiful landscape.

With GFNY Chile, yet another South American challenge has been added to the calendar on November 26. The race will be held near Santiago, in one of Chile’s great wine valleys.

“Our goal is to further grow GFNY so no rider in the world is far from having a chance to BE A PRO FOR A DAY,” says GFNY CEO Uli Fluhme. “We work hard to achieve this, but without ever compromising GFNY quality.”