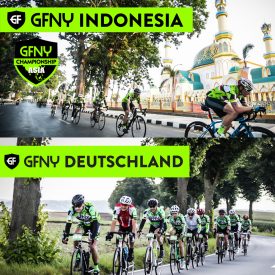 At the second GFNY Deutschland, a foggy morning set a dramatic tone in Hameln, Germany. Sunshine broke through later in the day just in time for the post-race celebrations at the after party and presentations.

Tasche crashed on the descent of Roter Fuchs. He was able to get back on the bike but Mönig’s group was out of reach.

On the final climb, Kropp was unable to maintain pace with Mönig, Zucker and Ottosen. After 165km of racing, it came down to a 3-way sprint that was decided in Mönig’s favor, crossing the line in 4:38:56. Zucker took second and Ottosen third.

The men’s race was decided in an exciting sprint finish. Battling hot and humid conditions, Raziff Jafaar from Malaysia prevailed defeating Michael Naert (Singapore, Matador Racing All Stars) by one second in 4:17:56 over the 160km course.

Naert’s teammate Alexander Ivakov (Russia) rounded out the podium a few seconds back in a time of 4:18:04.

In the women’s race, a strong race from Shirley Teo of Singapore saw her comfortably take the top step in a time of 05:53:18. Rounding out the podium in second was Fransisca Harlijanto from Indonesia and in third, Jcy Ho from Hong Kong.